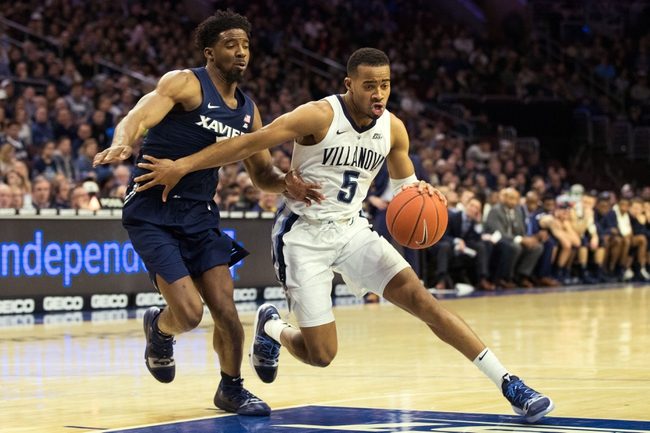 Poor shooting for the Wildcats was much of the story in the first half as the Musketeers defense held Villanova to 4-14(28.6%) from behind the arc and forcing eight turnovers. Xavier opened up a ten point lead with 2:36 to play in the first half and was able to hold off the Wildcats from making any significant run. A Phil Booth backdoor cut and dunk trimmed the lead to six points at the half with the momentum starting to swing towards Villanova.

Xavier came out of the locker room ready to go for another 20 minutes as they held Villanova to only five points in the first four minutes of the half. Sticking with it and using their own defense Villanova was able to claw their way back in the game with a putback dunk by Saddiq Bey cut Xavier’s lead to two before an alley-oop by Paul Scruggs was finished with authority by Zach

Hankins forcing a Villanova timeout and giving the Musketeers a 45-41 lead with 11:29 remaining. The teams traded baskets from here on until Paul Scruggs drained a three-pointer with 6:14 remaining giving the Musketeers a 53-47 lead. The suffocating defense continued from that point on and at the under four media timeout with 3:35 on the clock Xavier held a seven-point advantage. After a Jermaine Samuels, three Xavier missed a shot and Phil Booth was fouled and knocked in both free throws bringing the Wildcats back to within two as the clock continued to dwindle. After a layup by Hankins, Samuels found space and got the bounce as another three fell cutting the lead to one with 0:52 remaining. Tough defense from Villanova made Xavier scramble and panic before the ball found the big man once again, and Hankins was fouled on the shot. Hankins made one of two and Villanova tied the game on a tip-in by Eric Paschall to send the game into overtime.

Neither team was ready to give up as Zach Hankins started the overtime period with a basket down low but Villanova was too much for the Musketeers. Five points on offensive rebounds gave the Wildcats a three-point lead before Jermaine Samuels hit another three down the stretch pushing the Wildcat lead to 68-62 with 2:26 to play. Xavier still had fight left, however, and clawed there way back to within three with 0:04.1 seconds going to the foul line for two shots. But the six-point lead proved to be too much for the Musketeers as the tip in by Eric Paschall helped send Villanova to the Big East Championship game while shattering Xavier’s NCAA tournament hopes 71-67.