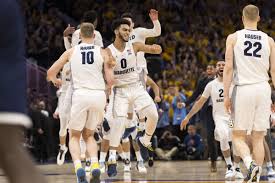 It has been a season of unpredictability in the Big East and much of that looks to remain the same moving forward into the Big East Tournament. The Big East looked like an unfiltered MMA brawl throughout the year and nothing is going to stop that moving forward. The Big East finished as the only conference in the NCAA with every team finishing the regular season with an above .500 record. Villanova came down to Earth and joined in the fun while the teams who remained in the cellar also made a move into the pack. Third through tenth place in the conference was decided by two games while Marquette and Villanova fought it out for the top spot. So is the Big East really down this year or is it much better than people give it credit because of the beating it took day in and day out? The NCAA tournament may be the determining factor but until then every team will need to go through one more bout and hope to make it to the Final Round as all ten teams have a legitimate chance to win the Big East Tournament.

Butler 73 – Providence 69 This will be the third meeting between the two in the last 15 days. Providence got the best of Butler on both occasions winning in OT at Butler and shooting out of their minds at home going 11-19 from behind the arc. This will be a will test for the Bulldogs as they have struggled in the Big East tournament only going 1-5 since the Big East realignment. A very even game all around Butler is led by Kamar Baldwin (17.5 ppg) while Providence is led by Alpha Diallo (16.1 ppg). Butler will need to turn up the defensive intensity and disrupt the passing lane as the Friars are averaging 16 assists against the Bulldogs as well as keep the Friars off the glass. However beating a team three times in a season is difficult, doing it three times in 15 days proves to be even harder.

DePaul has gotten the best of St. John’s in both of their previous meetings but with these two matching up once more before the season is over there is only one thing to say. Shamorie Ponds! Ponds missed the first meeting between the Blue Demons and Red Storm and then went off for 29 points in their second loss to DePaul. Ponds is a dynamic player who needs to be more aggressive on offense while the team as a whole need to keep an eye on Max Strus of DePaul who outscored Ponds with 43 of his own to give the Blue Demons their second victory over St. John’s. DePaul has had an amazing season getting out of the basement of the Big East and joining the rest of the pack but it looks as if their time is coming to an end for this season.

Villanova’s kryptonite has been Butler over the past few seasons but the Wildcats have been able to overcome that and sweep the season series. Villanova is just too much for the Bulldogs to handle. Butler will look to put the ball inside and to get easy baskets in the paint but the defense of Villanova will be too much for Butler’s true strength of shooting from the outside.

Both teams have gotten things going at the right time and both are looking to make a push into the NCAA Tournament. The two teams split their regular season meetings and look to gain the advantage in the rubber match. Creighton will need Martin Krampelj to be a force inside. Stopping Hankins and Jones of Xavier will be key. Turnovers will be the other big key for a Bluejays victory. Xavier is extremely turnover prone. If the Musketeers are handing the ball over to a very efficient offense it will be time to say goodbye to the NCAA tournament.

St. John’s is the one team that Marquette has not been able to beat this season. With the shooters that Marquette has and the length and athleticism that the Red Storm has it makes things extremely difficult for Marquette to get things going. To top all of that off Marquette is on a four-game losing streak. All in all the losing streak might actually be an advantage for the Golden Eagles. Marquette will not have played a game since the ninth and will be rested after St. John’s will have already played a game in the Big East Tournament. Ultimately the time the Golden Eagles have is enough time to get their legs back and fix the areas that they were struggling in leading them to the Semis of the Big East.

Seton Hall has been playing with their backs against the wall and has started to play some of their best basketball of the season. The Pirates split the season series with the Hoyas but still face the talk of being on the bubble. Seton Hall has been a complete surprise this season and will look to take advantage of everything they have been able to accomplish so far this season. Myles Powell will not let the Pirates lose.

With a game behind both teams, their legs will be tired and defense will start to get a little sloppy. Villanova is already the better defensive team and uses that to their advantage to get ahead of the Bluejays. Creighton will struggle from deep and the Wildcats will make just enough 3-pointers to give them the win and a trip to another Big East Final.

This could easily be the most exciting game of the Big East tournament. Marquette and Seton Hall split their two regular season matchups. This will be Myles Powell versus Markus Howard and whoever plays better will move onto the Big East championship game. Marquette however does hold a slight advantage with more weapons to back up Howard. The Houser brothers and Scar Anim will take a back seat but will end up stepping up when needed to lead the Golden Eagles to the Big East championship.

Seven points seperated the two teams in their two games this season. Marquette and Villanova each have a win over one another and each game was a battle until the end. THis will be much of the same and will certainly be a nail bitter until the final buzzer. Markus Howard struggled to win games down the stretch of the regular season but with the game tied and the ball in Howard’s hands he will get the job done giving Marquette the Big East Championship.