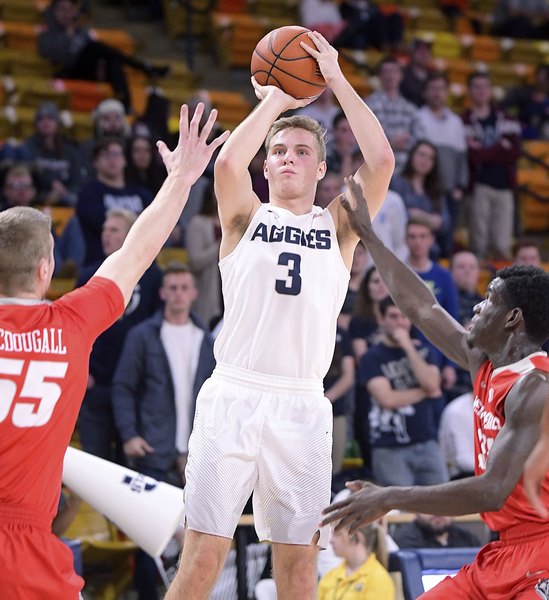 The MGM Resort Main Event showcase opened the night with the Utah State Aggies and Saint Mary’s Gaels. A Mountain West, West Coast Conference showdown that featured two undefeated teams was underwhelming at most as Utah State surge out of the gate and never relinquished the lead as they beat the Gaels 80-63.

Utah State shot 46% from the field in the first half and held the Gaels to 29% from the field. The Aggies played back and forth with the Gaels before Utah State opened up a 30-19 lead with 7:47 to play in the half and forced Saint Mary’s to call a timeout. Saint Mary’s had no answer for the transition game of Utah State as they pushed the ball up the court off of misses for easy baskets. The Aggies opened a lead as big as 16 in the first half before taking a 14 point lead into the break.

The second half brought more of the same as Utah State completely out worked the Gaels and pushed their lead to 24. Neemias Queta was big for the Aggies finishing with 24 points 9 rebounds and 5 blocks. Sam Merrill added 23 for the Aggies as the team shot 49.2% from the field. Saint Mary’s was held to five points for the first 8:00 of the second half but fought back to get within 12 with 7:41 remaining in the game before Utah State answered and regained their 18 point lead. One final push for the Gaels was unsuccessful as they looked to make the game interesting climbing back to 13 with 1:57 to play but that was as close as the Gaels would get the rest of the game.

Utah State will move on to play the winner of the Mississippi State, Arizona State in the Championship game of the MGM Resort Main Event while Saint Mary’s will play the loser on November 21.