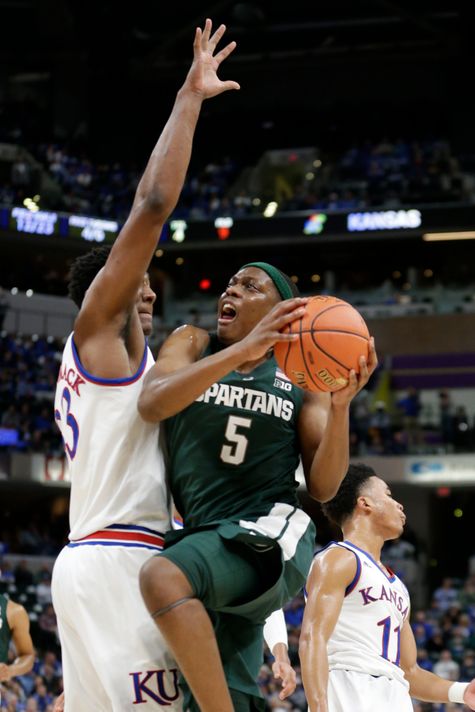 The moment we had all been waiting for finally arrived last night, as the college basketball fanatics finally got to see the first matchup between two ranked teams of the season. The game did not disappoint; both teams showed why they are top 10 teams and Kansas came away with a 92-87 win.

The game started off exciting, with both teams trading buckets for the first 8 minutes of the game. After that, the Jayhawks started to dominate. Kansas jumped out to a double digit lead midway through the first half after a Devon Dotson steal and layup. After a three pointer by KJ Lawson with 3 and a half minutes left in the first, Kansas had a 17 point lead, and this game looked over.

The second half was more of the same, as a red hot Quentin Grimes continuously knocked down three pointers and Udoka Azubuike became a force in the paint blocking multiple shots. At the ten minute mark left in the game, Kansas was still up double digits. The comeback started at the 5 minute mark for the Spartans, going on a 10-2 run and cutting the lead down to three with 35 seconds left. At the end however, the Spartans didn’t have enough in them, and Kansas held on for the win.

For Kansas, Quentin Grimes led the way with 22 points, including an impressive 6 three pointers. Dedric Lawson finished with 20 points while pulling down 14 rebounds as well. For Michigan State, Cassius Winston showed why he is considered one of the top point guards in the country, scoring 13 points and adding 11 assists. Kenny Goins finished with 17 and 11 and Joshua Langford led the team with 18 points.

A few takeaways from the game:

Kansas will take on Vermont in their next game on Friday, and Michigan State will look to bounce back against FGCU.