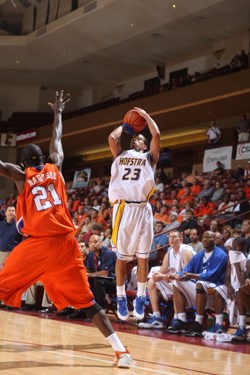 Cornelius Vines, a guard who most notably played for Hofstra from 2008 to 2010, will be continuing his professional basketball career with an expansion ABA team, the Syracuse Stallions.

Vines, a 6-2 guard originally from Syracuse, transferred to Hofstra in 2008, and quickly became a scoring option.  He averaged over 10 PPG in his first year, hitting over 33% from downtown.  Vines also pulled down just under three rebounds per game, and averaged a little over one assist per contest.

He became a full time starter his senior year, putting up over eight PPG, with career highs of over three RPG and over two APG.  Hofstra won 40 games during his tenure, and he noted Coach Tom Pecora as a “Good coach who taught a lot”.  He also added, “At Hofstra, I learned how to compete on both ends of the floor”.

After he graduated, Vines decided to continue his basketball career at the professional level, playing and winning a championship in Uruguay.  Vines says that playing in Uruguay was also key off the court in his life, “Playing in another country adds a lot of pressure.  I grew up and matured”.

Now, after also playing in Canada and recently becoming the new coach of Syracuse Academy varsity, Vines will be bringing his talent to the American Basketball Association, to play for the new expansion team, the Syracuse Stallions.

Vines really noted on the importance of the Syracuse community in regards to his decision to play there.  He commented, “Having things in the (Syracuse) community gives people things to do.  It motivates fans to support us, because some people are not fortunate enough to go to a Syracuse Orange basketball game”.

Vines will team up with former ‘Cuse big Dajuan Coleman, as the Syracuse Stallions kick off play on October 28th against another Upstate NY expansion team, the Oneonta Octane.