What if players had to stay all 4 years? This is who would’ve won the 2018 NCAA Tournament 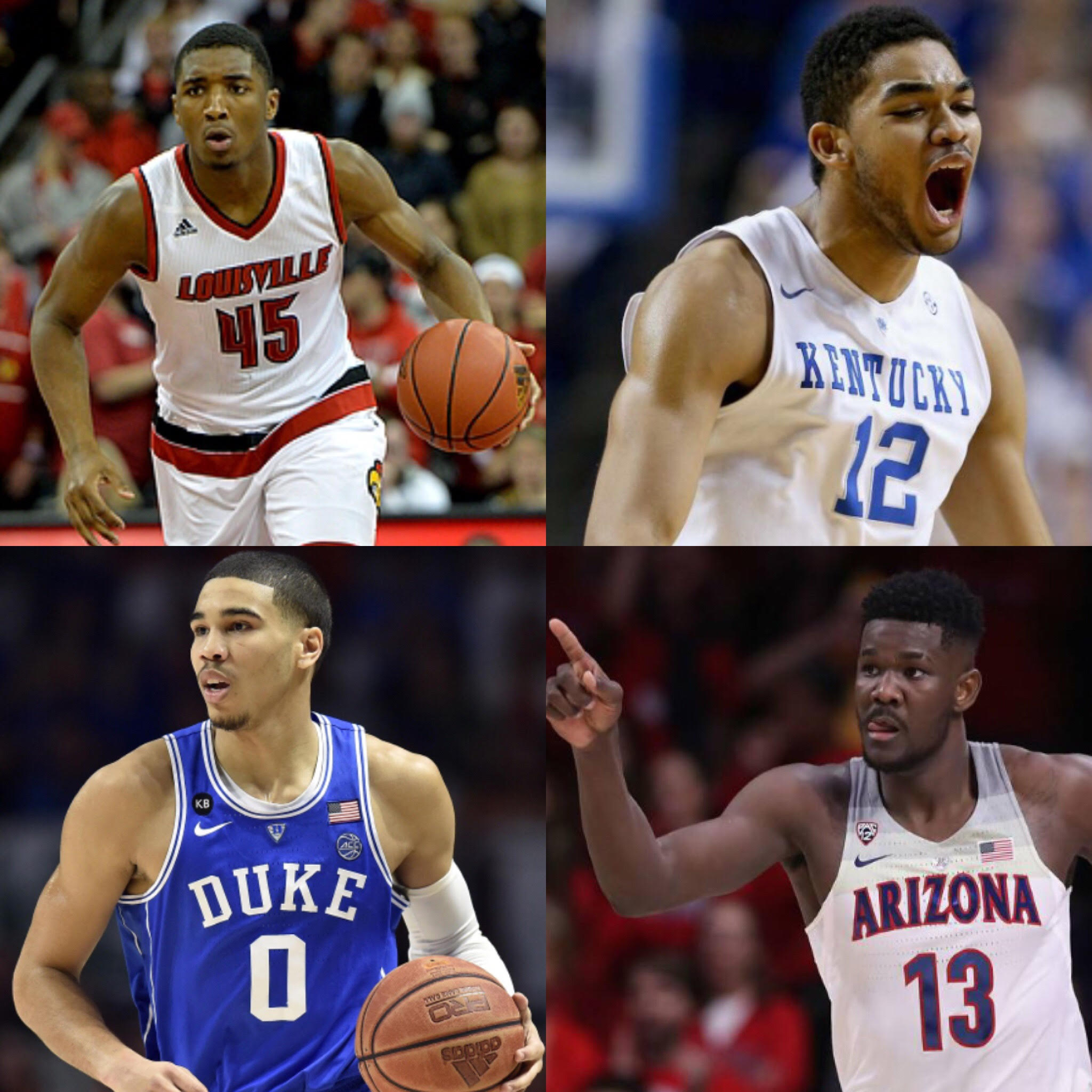 Let’s be honest.  The NCAA would never actually do this.  Sure, the competition would be amazing.  It could alter the entire sports landscape.  However, it would be such an outlandish idea, that it is merely fun to think about… which is just what I did.  Instead of doing every single division 1 team, I went through the top 40, and chose 16 teams to make a bracket and figure out the winner.  First, a few rules:

Kentucky vs. Virginia: The Wildcats take this one easily, 94 to 54.  Virginia’s defense can’t stop the interior presence of KAT and Cauley-Stein, while Booker drops an easy 25.

Duke vs. Villanova: Duke runs by Nova, 87 to 62.  Like Kentucky, Duke had so many one and ones, and like Virginia, Nova had none.  Bagley and Tatum combine for 40.

Kansas vs. UNC: Sticking with the trend here, Kansas wins pretty easily, 83-70.  This one is close thanks to 15 points in the first half from Berry.  Kansas gets hot though, thanks to three second half three’s from Oubre, putting the Jayhawks on top.

Louisville vs. Michigan State: Louisville wins the closest game between the 1 and 4 seeds, 75-69.  Miles Bridges goes off for 23, but Donovan Mitchell and V.J. King combine for 38 of their own.  Cardinals into the Elite 8.

Purdue vs. Oregon: Finally an upset!  Oregon takes this one, 80-72.  Swanigan and Haas each have double-doubles, but the speed and athleticism of the Ducks gives Oregon the win.

Syracuse vs. Maryland: Syracuse takes it on a buzzer beater, 68-66.  Maryland fights close, with Kevin Huerter going off for 12 points off the bench.  However, the zone is too much for a Maryland team that struggles shooting the ball, and Malachi Richardson hits the game winner for the Orange.

Arizona vs. Seton Hall: Arizona takes down Seton Hall in a very close one, 81-77.  Isaiah Whitehead goes off for 24 points, and Angel Delgado pulls down 17 rebounds, but the Pirates struggle to defend Markkanen and Ayton, who find themselves in the next round.

UCLA vs. Florida State: Florida State upsets UCLA, 74-66.  Both teams struggle from the floor, but the big men for the ‘Noles step it up.  Lonzo Ball finishes with 16 and 8, but Jonathan Isaac scores 10 of the last 12, giving FSU the upset victory.

Kentucky vs. Oregon: A much tougher game for Kentucky, who is matched up very well by the Ducks.  However, Booker gets hot again, going off for 28.  Oregon pulls within single-digits with less than 4 minutes to go, but Calipari gets his guys together in time.  UK wins, 84-71.

Louisville vs. Florida State: A very sloppy game, both teams shoot below 40% from the field.  However, Pitino’s coaching allows for Louisville to attack the inside and get Isaac in foul trouble.  Louisville skates by, 65-59.

Kansas vs. Arizona: Kansas falls to Arizona, 83-80.  Kansas gets off to a big lead, thanks to a fast start from Graham and Newman.  However, Arizona gets going in the second half, coming back from a 9 point deficit to tie things up at 72 a piece.  Ayton dominates down low in the final minutes, giving Arizona the upset win.

Duke vs. Syracuse: Syracuse slows Duke down to start off the game, but Duke is able to run by, 78-66.  Syracuse’s length bothers Allen, Trent, and Winslow, but Okafor, Ingram, and Bagley are able to pound it down low against a ‘Cuse team who lacks a true center.

Kentucky vs. Louisville: In this installment of the Governor’s Cup, Kentucky is able to take it easily, 104-85.  Donovan Mitchell is the only Louisville player to shoot above 45% from the floor, finishing with 32 points.  As for the Wildcats, KAT drops 25 and 12, Gilgeous-Alexander has 22, and Booker scores 18.

Duke vs. Arizona: Arizona enters the game as 11 point underdogs, and proves everyone wrong.  DeAndre Ayton and Lauri Markkanen show tremendous grit, each finishing with 20 point double-doubles.  However, Stanley Johnson goes an ice cold 3/14 from the field, allowing Duke to stay close.  In the final seconds of the game, Grayson Allen hits a go-ahead three – and appears to trip Rawle Alkins on his way up the court.  Refs don’t see it, Ayton throws up a prayer, and Duke is victorious, 83-82.

Kentucky vs. Duke: In what has all the makings to be a classic game, this one delivers.  The two blue bloods trade buckets for what seems like the entirety of the game – until Kentucky is able to take a 73-65 lead with under three minutes to go.  Then Grayson gets hot, hitting not one, not two, but three straight threes to give Duke a one point advantage.  KAT answers with a lay-up of his own, with less then 15 seconds remaining.  Grayson goes to beat the buzzer again, but the length of Kevin Knox is able to alter his shot, giving Kentucky the title, 75-74.