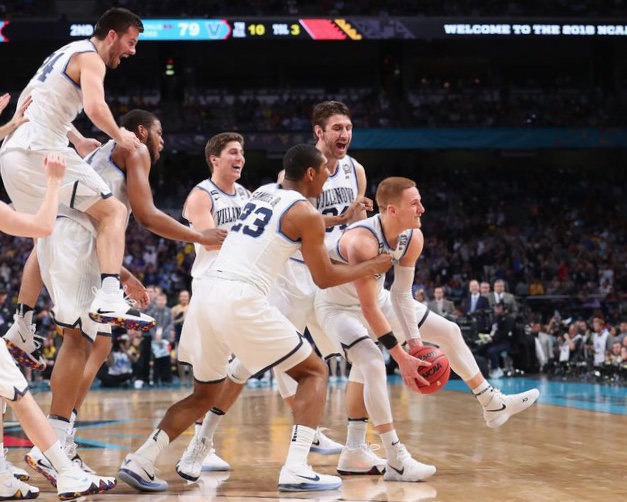 Villanova defeated Michigan,79-62, to win the National Championship. The Wildcats took over offensively by spreading the floor and getting open looks to pull away from Michigan in the second half.

After Michigan jumped out to an early 21-14 lead with 11 minutes to go in the first half, Jay Wright and Villanova put on an offensive clinic to tie the game at 23 and never trail past that tie. The Wildcats ended the half on a 14-5 run to take a 9 point lead into the break.

Villanova continued to utilize their number one ranked offense by extending their lead. Michigan trailed by no less than 7 in the entire half. With 3:51 left in the game, Mikal Bridges knocked down a three pointer to give Villanova a 22 point lead, the largest of the game for the Wildcats.

Donte DiVincenzo was the championship MVP, scoring 31 points off the bench. He single handily outscored Michigan’s bench by 24. He and Bridges were the only two double digit scorers for Villanova, but two others added on at least 8. Freshman Omari Spellman also pulled down 11 rebounds.

Villanova’s offense looked as good as it had been all season during the championship. Donte DiVincenzo and Jalen Brunson did a phenomenal job of spreading the floor, finding open shooters, and blowing by Michigan defenders. DiVincenzo, however, is more proud of his memorable blocked shots, saying he takes pride in “defense and just bringing energy” to his team.

Villanova brings home their second title in three years, this championship being historic. The Wildcats become the fourth team to ever win every tournament game by double digits, capping their dominate run with a 17 point victory. Villanova was one of the favorites going into Selection Sunday, and they certainly proved that they were deserving of the praise.

Michigan is still searching for the schools second national title, as they have lost their last two national championship games. However, the Wolverines will go home with bittersweet feelings, as they can still enjoy their tournament run and B1G championship. They will return to Ann Arbor and hope to finally win it all in 2019.