Kansas Beats Duke in Battle of Blue Bloods, Moves on to San Antonio 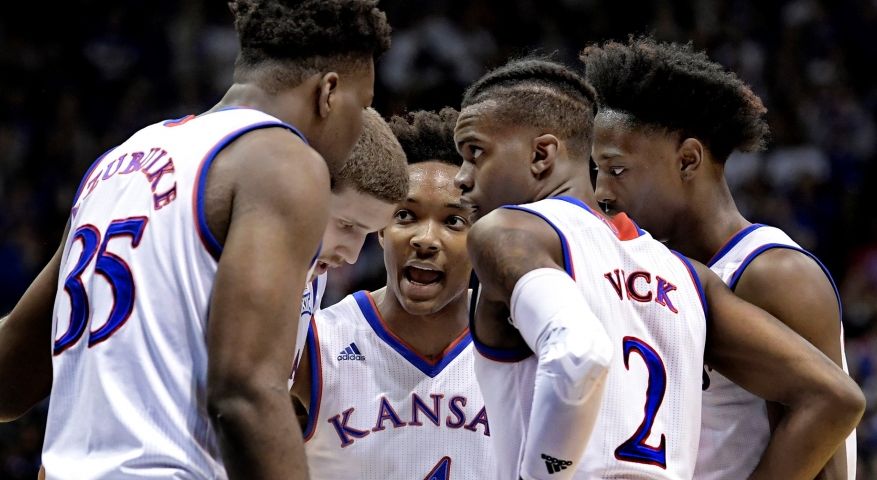 Kansas defeated Duke, 85-81 in overtime, in the battle of blue blood programs to advance to the Final Four in San Antonio. In what was perhaps the game of the year, Kansas came back to tie in regulation and took advantage of big opportunities in overtime to claim victory.

Duke held a 36-33 lead going into the break after a very scrappy first half that featured tremendous hustle and lackluster shooting. However, in a game featuring many future NBA stars, the play was bound to improve.

Kansas regained the lead with just under 18 minutes left to play, and held that lead until Duke tied the game at 57 with 10 minutes left. After that point, the game intensified and neither team was able to hold a lead for more than three and a half minutes.

Behind by 1 with two minutes to play, Duke senior Grayson Allen knocked down four clutch free throws in 30 seconds to put his team up 3. Looking for a miracle, Kansas senior Devonte’ Graham spun around Duke defender Trevon Duval and passed right to his sharp shooting teammate, Sviatoslav Mykhailiuk, who knocked down the open three to tie the game.

Duke coach Mike Krzyzewski elected to not use a timeout, and Grayson Allen barely missed a turnaround jumper from just outside the lane at the buzzer. This game was headed for overtime.

Kansas fell behind early when Trevon Duval drove and hit a contested layup to start OT. The Blue Devils biggest lead in the extra period was only two, as Kansas did not let Duke score multiple unanswered baskets. With the game tied at 78 with 2:18 left to play, Kansas’ high scorer Malik Newman knocked down a three to put the Jayhawks ahead for good.

Duke did not regain the lead after Newman’s three. After missing contested shots on offense, the Blue Devils were forced to foul, resulting in free throws for Kansas that sealed Dukes fate.

This quite possibly was the game of the year. The two programs that faced off are very similar in rosters, culture, and play style, and it translated on the hardwood to a scrappy, passionate, and intense game. This elite eight matchup had 18 lead changes as well as 11 ties. The biggest lead anyone held was 7, when Kansas was ahead 48-41 with 15:31 to go in regulation.

Malik Newman was not only the hero for the Jayhawks, but he was most definitely the MVP of the game. The Sophomore guard tallied 32 points on 50% shooting with 5 made three pointers. Duke was led by freshman point guard Trevon Duval who put up 20 points. Both teams combined to put 9 players into double figures for scoring. Kansas’ Sviatoslav Mykhailiuk and Duke’s Marvin Bagley earned double doubles, pulling down 10 rebounds each.

Kansas now advances to the Final Four, their first in 6 years. They will be tasked with the highest remaining team, Villanova, who is fresh off a convincing win over a solid Texas Tech squad.

Although this is the end for most of the Duke player’s collegiate careers, they had a tremendous season and will certainly do big things at the next level. As for Coach K and his few returners for the 2019 season, they will rely on the NCAA’s best ever recruiting class to bring them just a bit further than this years team did.