Loyola Shoots Their Way into the Final Four 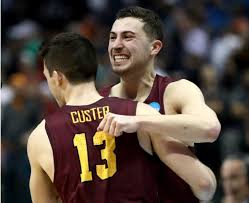 #11 Loyola Chicago Ramblers have punched their ticket into the Final Four. America’s Cinderella didn’t need any shots in the last five seconds of the game this time, as they showed Kansas State what a true Mid-Major plays like.

The Wildcats of Kansas State had been a force to deal with this March as they had not allowed a team to score 60 points. They were holding opponents to 33.9% from the field and 26.3% from beyond the arc. This formula made the Wildcats a tough out and held two top 25 offenses to less than 60 points. The Wildcats felt that with this performance they could outlast the Ramblers and move on to the Final Four.

In a game that was played with mostly 10 guards on the floor the Ramblers were too much for the Wildcats Defense as they had to respect both the 3-point shot and the drive to the basket. Loyola shot 57.4% from the field and knocking down nine 3’s while shooting 50% from behind the arc. Ben Richardson led the way for the Ramblers as he went 6-7 from behind the 3-point line.

In a day where small ball has become a huge factor in the game of basketball it was evident in this match up as both teams looked to get smaller and smaller as the game went on. Loyola led by 12 at halftime and stretched the lead to as many as 23 before the Wildcats fought back and trimmed the lead back to 12. However, the deficit was too much for the Wildcats as Richardson hit a big shot to put Kansas State away for good.

Loyola now moves on to play in the Final Four for the second time in school history and will look to do the same as the 1963 Final Four team. Win a National Championship.