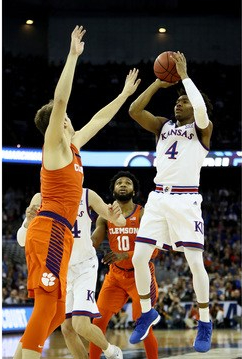 The Kansas Jayhawks will be heading to the Elite Eight after they held off Clemson to advance. The Jayhawks and Tigers battled it out in Omaha as Kansas built a huge lead as Clemson struggled to score.

Kansas shot well from their field and was able to use a 15-5 run to build a 13 point lead at half. The Jayhawks used a the three point line to help build the lead as they hit big threes to continue to pull away. While Clemson was able to get stops on the defensive end the Tigers struggled on offense turning the ball and shooting poorly as they tried to take Kansas one on one and forgot the team ball that got them this far.

In the second half, it was much of the same as Kansas started hot and built their lead to 20. That’s as far as Kansas could build their lead as Clemson buckled down on defense and was able to stop Kansas time and time again but was unable to get anything to fall on the other end. With the stops piling up for Clemson they finally started to score and closed the gap to 13 before Kansas pushed hit another big shot. Clemson continued to battle and was able to get as close as 4 with 0:15 seconds left but ran out of time to punch their ticket to the Elite Eight.

Gabe DeVoe kept the Tigers in the game as the team struggled. Ultimately finishing with 31 points as Clemson surged. Udoka Azubuike used his size to really hurt the Tigers inside and finished the game with 14 points and 11 rebounds as Devonte Graham orchestrated his team to play well down the stretch finishing with 5 rebounds 4 assists and 16 points.

Kansas will now await the winner of Duke and Syracuse as they will look to advance to the Final Four by taking down two ACC teams on the way.