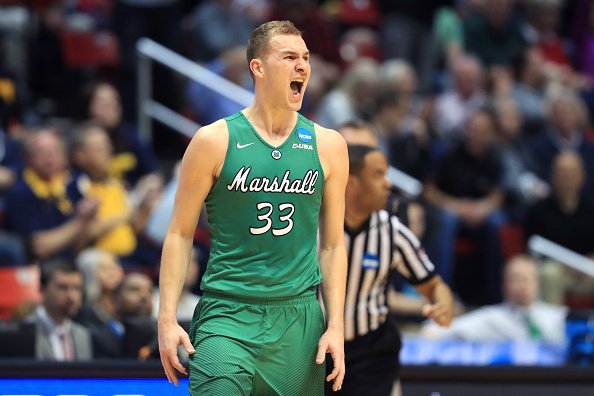 Jon Elmore and Conner Frankamp each dropped 27 as the two went back and forth in this epic first round matchup. The game had great pace and had plenty of lead changes in the second half. They were gunning it from deep and both did not want to be sent home. Sadly, this was Conner Frankamp’s last game, but he played like he didn’t want it to be. He had a career day and did everything in his power to keep the Shockers in the game. Jon Elmore did it all for Marshall from getting to the free throw line to hitting 3’s from the hash mark. He killed the Shockers with his dribble penetration and put a ton of pressure on the defense. He had some beautiful alley oop passes and put several Wichita State Players in foul trouble.

As great as Marshall’s offense was, they won it with their defense. They put pressure on Landry Shamet and forced him into several bad turnovers and held him to 3-13 shooting. Because of this pressure, they had 26 points off turnovers which is the main reason they won the game.

Unfortunately, the final minute of the game will be remembered by the replays. The reviews ruined the flow of the game and dragged the game on for way too long. And not only that, but they missed a crucial call. After Frankamp hit a 3 pointer to narrow the lead to 3, Marshall quickly went up the floor and attempted a layup that was blocked. Both teams scrambled for the rebound and the ball found its way out of bounds with 36 seconds left. A lengthy replay ensued and according to several replays, it appeared the ball was off a Marshall’s players hand but possession stayed with Marshall. Instead of Wichita State having the ball with a chance to tie the game, Marshall had the ball and scored off a nice inbound play and the game was essentially over. It’s a shame when refs affect the outcome of games where both teams were going at it like these two.

As bad as this call was, Marshall deserves all the credit in the world and earned this win. They gave it to Wichita State all day and were the better team. Murray State or West Virginia will have their hands full next round.