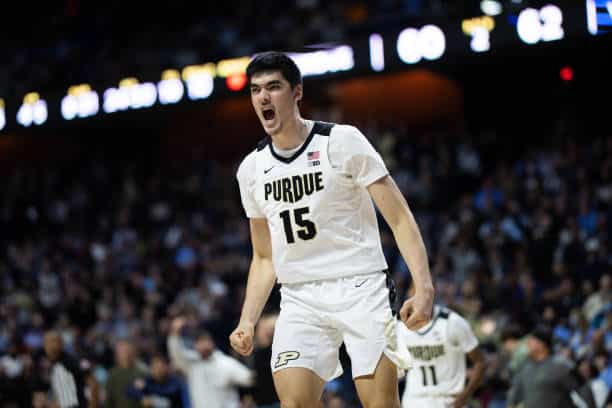 Joe Jackson and Ethan Carbone combine to give their Big Ten basketball power rankings for week 5.

Matchup of the week: Illinois vs. Texas

Sneaky good matchup of the week: Iowa vs. Duke

All times listed are in EST.

Purdue had a quieter week after dominating Duke and Gonzaga the week prior. However, Zach Edey still dominated, scoring 25 against Florida State and then 31 against Minnesota. Also, take one look at the wins Purdue has racked up this season and you’ll understand why so many people are high on the Boilermakers.

Illinois continued its path of struggling when playing Maryland. However, when they played Syracuse, the Illini allowed just 44 points as Coleman Hawkins went for a triple-double. This week is a big one as they meet #2 Texas in New York City.

The Hoosiers beat the Tar Heels of UNC as they took advantage of their sloppy play as Assembly Hall was rocking. After the massive success, they fell to Rutgers in a very ugly game, showing that Indiana still has work to do offensively.

Maryland continued their dominant start to the season, winning against Illinois, and then stomping Louisville by 25. Kevin Willard has coached the defense to swarm guards and has turned Maryland into a remarkable team.

Kris Murray has been especially dominant and is coming off a 31-point masterpiece against Georgia Tech, accounting for an outstanding 38% of his team’s points. This week is an absolute gauntlet for Iowa, who faces Duke at Madison Square Garden, followed by home games against Iowa State and Wisconsin. A 2-1 week would be great.

After over a month of basketball, freshman Bryce Sensabaugh leads the Buckeyes in scoring as their core continues to impress. Five players are averaging at least 9.9 points per game so far this season.

Seth Lundy, Jalen Pickett, and Camren Wynter have taken the senior roles on this team, which dropped a close loss in 2OT to Clemson. The Nittany Lions are still 6-2 on the season and have a chance to really showcase their skills against Michigan State and Illinois this week.

After the loss to Wake Forest, Wisconsin bounced back following an incredible performance from Chucky Hepburn, who finished with 19 points on 7-of-10 shooting in a win over Marquette. The Badgers also own three very good wins early on this season, with chances at two more against Maryland and Iowa this week.

After a disappointing loss to the Miami Hurricanes, the Scarlet Knights defense stepped up and shut down the dominant Indiana Hoosiers offense thanks to Caleb McConnell taking over. Cliff Omoruyi and co. held Trayce Jackson-Davis to just 13 points on 5-of-11 shooting.

After a flaming hot start, the Spartans have started to cool down and have played a couple of disappointing games. A 20-point loss to Notre Dame and a home loss to Northwestern made it a rough week for Spartans fans to take in.

Michigan is coming off two tough losses against some great teams in Virginia and Kentucky. Hunter Dickinson has played well as expected and the Wolverines were in both games, just unable to come home with any wins.

Northwestern got handled by Pitt, but then rebounded well from the loss to take down Michigan State. Boo Buie hit the 20-point mark for the second time this season, as the Wildcats improve to 6-2.

Nebraska had one of the best weeks that their basketball program has had in a while after they beat the 7th-ranked team in the county. Derrick Walker was nearly unstoppable, scoring 22 points. The Cornhuskers come into a challenging week against two top-15 opponents.

Now on a 3-game losing streak, the Golden Gophers have yet to produce a true quality win as they dropped two games to two tough teams. Jamison Battle has looked good when he’s played but overall the younger talent will need to mature and grow over the rest of Big Ten basketball play.