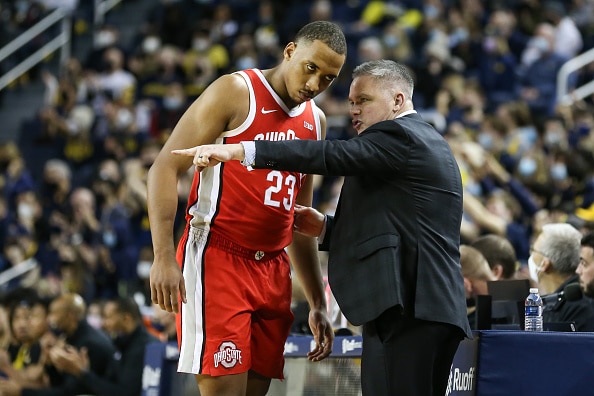 CBB Review’s Ethan Carbone goes in-depth on the top 30 college basketball recruiting classes. Next up are the Ohio State Buckeyes who come in at number 8.

Gayle comes to the Ohio State Buckeyes as a powerful athlete who can drive to the hoop easily while fighting through traffic. He is able to facilitate well for a shooting guard and will hit shots from three with ease. Gayle has unlimited energy and will not hesitate to take on bigger defenders in the post.

As a freshman, he will play as a backup, however, his potential is being an All-Big Ten player. So far in two games, he’s averaging 8.0 points, 2.0 rebounds, and 2.0 assists on 60% shooting.

Thornton slots in as a solid point guard option for the Ohio State Buckeyes who are loaded at the guard spots. But even with the competition, he’s been able to average 23.5 minutes a game. Thornton is a defensive-minded point guard who is strong and bulky and is able to lock down guards. On offense, he can be a spot-up shooter and will be a leader in the locker room.

Okpara comes to Columbus as a paint monster, defending opposing bigs with the potential to turn into an elite rim protector. On offense, he will crash the glass grabbing many rebounds. Okpara is able to put up simple shots and is working on improving his offense.

As a freshman, he will play as a backup, but by the time he’s a senior, Okpara can be a feared defender in the Big Ten.

So far this season he’s averaging 3.0 points and 3.0 rebounds per game, playing over 16 minutes per contest.

Sensabaugh comes in as a score-at-will forward will the ability to move fast, but still in control. He can handle the ball like a guard, while also being able to facilitate like one as well. He gets to the free throw line, and isn’t afraid to shoot the three ball as well.

Sensabaugh projects a sixth man or starter this season, however by the time he’s a senior he will be a name known by all Big Ten fans.

So far he’s tied for the team’s scoring lead with 15.5 points and has grabbed 6.5 rebounds a game. He has struggled a bit from deep early on, at under 30%.

Hardman comes to the Ohio State Buckeyes program as a deadeye three-point shooter who shot nearly 40 percent from beyond the arc in his junior year of high school. A perfect catch-and-shoot guy, Hardman will make an impact for OSU.

As a freshman, he’s not expected to play much, however, Hardman’s elite three-point shooting should earn him time at one point or another.

He has yet to play this year.