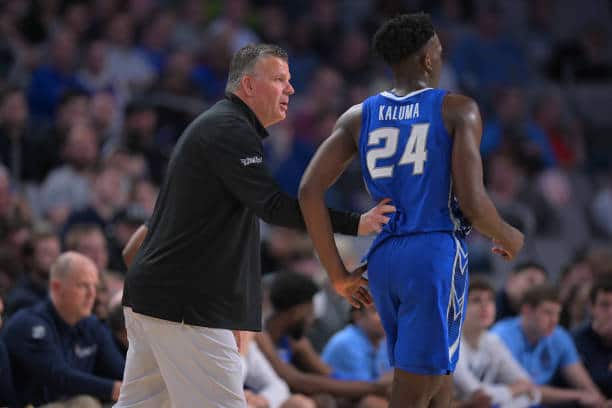 Matchup of the week: Xavier vs #13 Indiana

Sneaky good matchup of the week: Providence vs Miami (Fla)

Creighton was able to handle business in week one, albeit with a bit of a scare against St. Thomas (MN). Against North Dakota, the Bluejays were more of what we expected, winning by 35 points. In both games, Baylor Scheierman was less than impressive. It’ll be interesting to see if that’s just a slow start to the season, or a tough transition on a team with other great offensive weapons.

I’ve been high on the Huskies all offseason and they delivered with easy wins over Stonehill and BU. Adama Sanogo is virtually unguardable for most mid-major opponents and Alex Karaban has been a pleasant surprise in Storrs.

I said it when the season started – if Zach Freemantle can revisit his sophomore season, Xavier is as good as any team in the country. So far, he’s playing aggressively on offense and contributing defensively. Xavier has a major test against Indiana on Friday, which will really help us see if the Musketeers are for real.

Losing to Temple won’t buy you any brownie points. I’m not overly surprised, given the changes within the Villanova Wildcats’ program and the injuries they’ve had to deal with. Things don’t slow down this week either with a game against Michigan State. A win would be a sigh of relief for Nova nation, but a loss will have them scrambling.

Marquette’s 10-point win over Radford was sneaky good. The Highlanders nearly knocked off Notre Dame later in the week, so right now, that’s a better win than you may think. To then beat a team from the MAC by 24 says a lot about what Shaka Smart has in Milwaukee this season.

St. John’s was my Big East basketball sleeper team this season, but at 2-0, it’s happening differently than I expected. Posh Alexander is playing fine, but Andre Curbelo and David Jones have really stepped up and added some juice to this Johnnies team.  They’ve got their first semi-real test against Nebraska this week.

The Pirates have been anything but passive under Shaheen Holloway, forcing 23 turnovers against Monmouth and another 20 against Saint Peter’s. The offensive flow has been shaky, and with a game against Iowa on Wednesday, Seton Hall fans may really find out what’s cooking in South Orange this season.

To be completely fair, I was never big on Providence before the season started, so this wasn’t be dropping them down in the power rankings. Instead, it’s the 1-point survival against Rider that has me a bit nervous about a very new-look Friars team. One positive? Jared Bynum proved why he showed be in contention for First-Team Big East this season. It was a scare to start the season, but it doesn’t mean I’m ruling the Friars out from a successful year.

The only Big East basketball team that didn’t play two games, Butler won convincingly over New Orleans. And that’s really why the Bulldogs aren’t higher or lower on this list. Everyone else in the conference has either played another team to solidify their 2-0 start, one way or the other. Butler did do a lot of things right. Manny Bates looks like he could impose fear into many big men in the Big East. Three games this week means we’ll get a very good taste of what Butler has to offer.

So far, DePaul has won two games by close enough margins to make you think the Blue Demons could be 0-2. In reality, DePaul has just struggled to keep leads up. Against Loyola Maryland, DePaul led by 14 points at the 2:44 mark, giving up some late buckets to the Greyhounds. They held a 20-point lead over Western Illinois in the second half, only to win by 12. Obviously, a win is a win, but against better teams, that won’t fly.

Georgetown’s game against Coppin State told you all you needed to know about the Hoyas. A struggling team trying to prove itself this year nearly lost to a much inferior team. Georgetown needed overtime to put away the 1-2 Eagles. The Hoyas played much better against Green Bay, limiting the Phoenix to less than 40% from the field. Tuesday’s game against Northwestern may not jump off the page, but it will help Georgetown really gauge where they stand in the power conference basement.