Freshman Duo Show out as Purdue Wins their Opener: 3 Takeaways 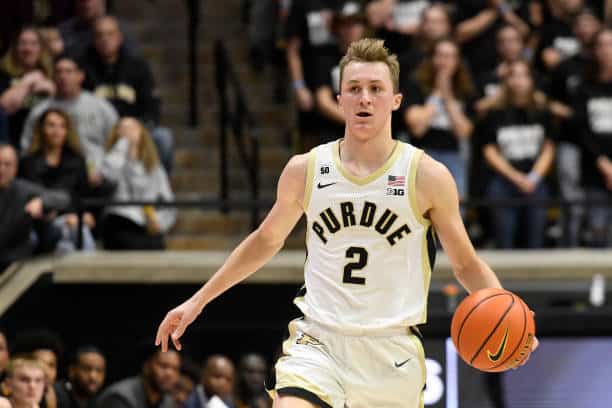 Purdue was able to beat Milwaukee 84-53. As is a common thing with a lot of good teams, Purdue got off to a slow start offensively, but they were able get things going with the help of great ball movement.

Fletcher Loyer led the way in scoring with 17 points on 5-12 shooting from 3. Brandon Newman came off of the bench to contribute 16 and some needed perimeter scoring. Braden Smith did a little bit of everything, having 7 points, 4 rebounds, 4 assists, and 7 steals.

Takeaway #1: Fletcher Loyer and Braden Smith will be the backcourt of the future for Purdue

In their first ever game at Purdue, the starting freshman backcourt duo combined for 24 points, 6 rebounds, 7 assists, and 8 steals while shooting 6-16 from 3. Loyer went 5-12 from 3 and led the team in points. What was crazy about Loyer’s shot selection is none of them felt forced at all except for maybe one. Maybe. All of the shots he took are ones Purdue and their fans are going to want Loyer to take. It is early, but he has potential to go down as one of the all time great shooters at Purdue.

As mentioned above, Braden Smith had 7 points, 4 rebounds, 4 assists, and 7 steals. I wouldn’t be shocked to see him get a couple triple-doubles in his career. At 6’0, teams are going to try and attack him on defense. He has a long wingspan however that teams aren’t going to be expecting. He utilized it against Milwaukee with 7 steals, the most for a freshman in Purdue history. He admittedly was gambling some, but Purdue will live with it at times. He also handled the pressure fairly well that Milwaukee put on him.

Edey “struggled” in the game only scoring 12 points on 4-13 shooting. He never seemed to get completely comfortable, and Milwaukee was throwing multiple wings at him constantly. So this must mean that he had a bad game right?

Nope. Edey finished with 12 points, 17 rebounds (career high), 2 assists, 1 steal, and 6 blocks (career high). Milwaukee did not put him into a ton of pick and roll action which allowed Edey to roam at the rim and deter shots. When put into action, I thought Edey did a pretty good job containing both the ball handler and the roller for the most part. Against a team like Milwaukee, that is expected, but it was still very good to see.

I have mentioned before that last year I thought Edey was a good post passer. This year he has improved even more. He only ended with 2 assists, but multiple times his kickouts from the post were what led to an open shot.

On a night that the half court offense only produced 0.795 PPP per Synergy, they relied on their transition offense to fuel them. This was not something that we always saw last year, unless Ivey got the ball. Part of it from the game is that the defense was able to force turnovers and get stops. This allowed Purdue to push with any of their guards and get good shots.

Smith is going to be fun in transition and all 4 other guys need to be ready for the ball. I was also impressed with the ability of Morton, Loyer, and Newman to push it when needed. They all were able to get ahead of the defense and create some wide open looks. Even Waddell helped create one in his limited minutes.

Next game for Purdue: Nov. 11 vs. Austin Peay