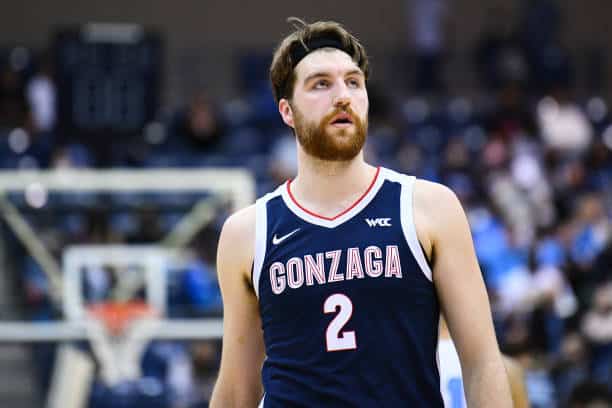 The Gonzaga Bulldogs return arguably the best college basketball player in Drew Timme and another strong supporting cast. They fully expect to have another dominant year.

CBB Review is once again ranking the top 100 teams heading into the 2022-23 season. Each day we will reveal the next team until we reach the team slotted at number one. Coming in ranked number 3 are the Gonzaga Bulldogs.

Gonzaga comes off of another dominant year that saw them win their conference, get a 1 seed in the tournament, and “only” make the Sweet Sixteen. Yet it was seen somewhat as a failure which is a full testament to the program that Mark Few has built.

Things look bright once again for the Gonzaga Bulldogs in large part because of the return of Drew Timme. They will have one of the top players in the country once again to hold down the fort. There are also a lot of really good wings and guards on this team plus the addition of a 7-footer. Gonzaga will have some versatility when building lineups that they hope will translate to more success.

This shouldn’t come as a surprise to many as he has been arguably the best college player the past two seasons. The trend should only continue as Timme comes into his senior year at Gonzaga.

Timme is automatic offense for the Gonzaga Bulldogs. He can work in transition or as the roll man, but he is lethal posting up. Per Synergy he was in the 93rd percentile for post-ups last season. Left block, right block, middle. It didn’t matter. Left shoulder, right shoulder, face up. It’s a bucket. When he gets the ball down low it is close to a wrap for the defense.

Speaking of defense, his will be monitored closely this season. He is not the greatest defender due to a lack of foot speed, but he is not the worst. If he wants to progress his game, a lot will come on that end. With elite rim protector Chet Holmgren in the NBA, more rim-protecting responsibility may fall on Timme’s shoulders.

Strawther is a player everyone wants on their team. A lengthy wing who can shoot pretty well, handle the ball when need be, and defend very well.

He is going to crash the glass hard which will be important when he is playing at the 4. He will there be looking to use his speed on offense to get past slower 4s, and try to use strength on smaller 3s.

Strawther can also run a little bit of the offense when needed, mainly in transition. He will run the occasional pick and roll, where he has found good efficiency. Strawther will be looking to do a bit of everything for Gonzaga this season.

With Timme dominating down low, there were not as many outside shots taken by Gonzaga last season. Rasir Bolton, a 46% three-point shooter, and transfer Malachi Smith, a 40.7% 3-point shooter, will look to take on a lot of the perimeter shooting burden. Strawther can also step out when needed. I would not be shocked to see if the Gonzaga Bulldogs get up a few more threes this season.

Gonzaga gets a lot of heat for being in the West Coast Conference that features a couple of quality teams near the top, but the talent fades off fast.

Nothing can be said about their non-conference schedule however as they have a myriad of tough opponents. They will take on either Purdue or West Virginia in the PK85 tournament, and they will face one other high-ranked opponent (in addition to Portland State in the first round). They also have neutral site games against Michigan State, Baylor, and Alabama. To top it off, they will play at Kentucky on November 20th, a matchup of 2 of the very best in the country.

There is little doubt that this team will be good, it will just depend on how good. They can once again get a 1 seed in the tournament. Will this be the year that can go further than they ever have and win a championship? They have the talent to do so for sure.