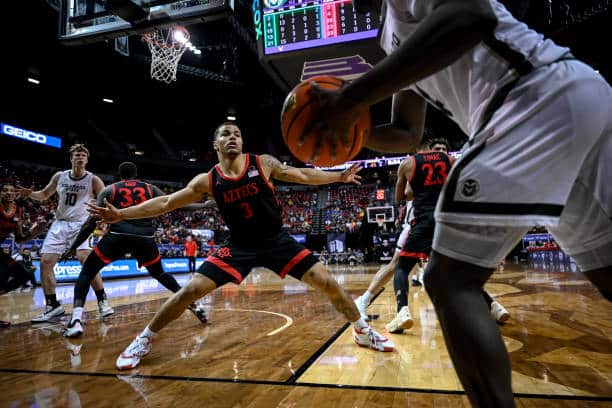 The San Diego State Aztecs come into the season with most of their team back, and one of the most dangerous defenses in all of basketball.

CBB Review is once again ranking the top 100 teams heading into the 2022-23 season. Each day we will reveal the next team until we reach the team slotted at number one. Coming in ranked number 20 are the San Diego State Aztecs.

San Diego State will bring back 4 out of their 5 starters, and most of the rest of their rotation. They will be a very experienced team, and it will make them one of the more dangerous teams in college basketball.

After coming off a Mountain West All-Conference First Team selection, Matt Bradley is in prime position to do that once again for San Diego State. He is an elite scorer that can take most defenders off of the bounce.

He has been very comfortable running both isolations and pick and rolls. In a San Diego State offense that was just average, individual scoring creation falls a lot onto Bradley’s shoulders.

He also became a lot better off of the ball last season, ranking in the 96th percentile on catch and shoot 3s per Synergy. Most of these are contested threes, but he is such a good shooter that it did not really matter. He is going to have to do that once again this season.

On the defensive end, Bradley improved a lot last season. It helps being on one of the best defenses in the country, but Bradley played his part on that end, doing what was needed of him.

The reigning Mountain West Defensive Player of the Year will be the favorite to win that once again. He anchors the top notch defense from the inside, averaging 6.9 rebounds and 2.2 blocks per game last season. His defensive presence allows guards to play physical, knowing that if there man gets past them, Mensah will be waiting near the rim.

On the offensive end, he is more of a high energy player, looking to set screens, cut, and get offensive put backs. If he can add a consistent post game, this offense will be able to take it a step up this upcoming season.

San Diego State’s defense was not fun for offenses to go up against. They play physical which allows them to force turnovers and contest a lot of shots. They had the 5th best defensive eFG%, and the 27th best defensive TO%. With most of the team back, this defense is going to be super legit once again, competing for the top defense in college basketball.

San Diego State will be the favorites in the Mountain West Conference, and they have a real chance to do some damage come March. If you love defense (or just good basketball) make sure to check them out as much as possible.

A good thing about their schedule is they will have some quality matchups early in the season. Their non conference schedule consists of matchups with BYU, Ohio State, Stanford, Arizona or Cincinnati, and Saint Mary’s.