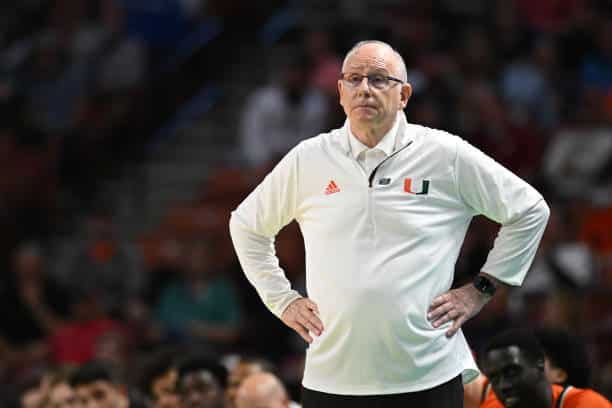 A surprise Elite Eight run for the Miami Hurricanes has the momentum in Coral Gables pointed up heading into the regular season.

CBB Review is once again ranking the top 100 teams heading into the 2022-23 season. Each day we will reveal the next team until we reach the team slotted at number one. Coming in ranked number 24 are the Miami Hurricanes.

Last year’s Miami team wasn’t perfect by any means, as evidenced in losses to UCF and Dayton in non-conference play, then getting swept in conference play by both Florida State and Virginia, neither of which made the tournament. Then, the Hurricanes were inches away from getting bounced from the ACC Tournament in the first round by Earl Grant’s Boston College squad.

But, the Miami Hurricanes were at its best when it mattered, taking out USC in what was one of the best matchups of the first round, then dismantling their next two opponents, Auburn and Iowa State, before getting beat by the eventual champions, Kansas. The Hurricanes became the first 10 seed to make the Elite Eight since Syracuse made the Final Four as a 10 seed in 2016.

The leader of the team last year, Kameron McGusty, averaged almost 18 points per game, but the sixth-year senior exhausted his eligibility and signed with the Pistons in the Summer League. Despite also losing Charlie Moore from last year’s squad, the Hurricanes bring back two double-digit scorers in Isaiah Wong and Jordan Miller. Wong was second on the team in PPG, and scored 43 combined points over the first two tournament games against USC and Auburn.

The Miami Hurricanes also picked up two big additions in the transfer portal to make up for the losses of McGusty and Moore, gaining high-scoring Nijel Pack from Kansas State and Sun Belt Player of the Year Norchad Omier from Arkansas State. With a similar team compared to last year’s squad, Miami is a threat to return to the tournament yet again under Jim Larrañaga.

Isaiah Wong could easily be this team’s MVP, and he was at times last year, but Nijel Pack is the best bet to replicate what Kam McGusty did for the Hurricanes last year. The Kansas State transfer was one of the biggest pickups in this offseason’s transfer portal, and while he stands at just 6-0, his ability to rack up points is among the tops in the conference.

The Indianapolis native has started all but one game in his career and hit threes at a 43.6% clip last season. That’s not due to the small sample size, either, as he averaged over seven attempts per game. Perhaps the most important detail of his career is the improvement in almost every stat category from his sophomore year compared to his freshman year. Pack improved his FG%, 3PT%, RPG, SPG, PPG, and FT%, and brought down his FPG and TO rate.

The only facet of his game that declined was his assist numbers, and that was due to being used differently schematically compared to his freshman year. The jump in numbers isn’t due to higher minutes either, as Pack actually averaged slightly more playing time per game as a freshman than as a sophomore. The ACC should be on notice, and if Pack can continue growing at a similar rate, he could work his way onto an All-American ballot or two.

The Arkansas State transfer went to high school in the Miami area but was born in Nicaragua. Standing at 6-7 and weighing 248 pounds, Omier will be one of the biggest players on the Miami Hurricanes roster and will fill a much-needed role in the frontcourt. What separates him from Pack, however, besides size obviously, is that Omier still has major questions to answer before playing the gauntlet that is the ACC regular season.

While he upped his PPG marks, kept his rebound rate at a very high mark, and bumped up his block numbers, he also added almost an extra turnover per game compared to his freshman year, averaging 2.7 a game last season. He also had a slight increase in fouls per game, moving an already-high mark of 3.1 per game to 3.3.

While Pack has already spent two years in the Big 12, the ACC is a completely different game than the Sun Belt. Of course, Omier played about the best he could against the competition, and as the old adage goes, you can only play the cards you’re dealt. At the same time, however, it’ll be worth monitoring how well Omier fares against the likes of Armando Bacot, Dereck Lively, and Jayden Gardner come conference play.

He’s certainly got the potential, and the Hurricanes are banking on him to provide some stability to the frontcourt and make up for the loss of Sam Waardenburg.

While the Hurricanes did a lot of things well last year, the defense was not one of them. Last year’s season could be summed up by a three-game stretch in which the Hurricanes gave up over 80 points every game and managed to win by scoring over 88 every game as well. The defense was exposed in losses to UCF and Alabama, and the bad news is that the defensive woes could continue. The team’s leader in steals, Charlie Moore, is gone. The team’s block leader, Sam Waardenburg, the only player above 1 BPG, is gone.

If there is a chance for the defense to improve, however, it rests on the shoulders of Jordan Miller and Arkansas State transfer Norchad Omier. Miller has already established himself as a premier defender, leading the team in rebounds last year with 5.9 a game, as well as swiping 1.8 steals and 0.6 blocks per game. The lengthy guard should fill in a large portion of last year’s void. Omier absolutely bullied the Sun Belt, averaging 12.2 rebounds a night, 1.6 steals, and almost 2 blocks per game.

He’s very solid offensively, but his best value comes on the defensive side of the ball, and he’ll be integral to Miami’s defensive hopes this year. Anthony Walker looked good in limited time last year, and there’s a chance he blooms into a defensive anchor for the ‘Canes. Look for freshman Favour Aire to get solid minutes this year as a defensive stopper inside, as well.

The bottom line is that the Miami Hurricanes can be as good as their offense can take them. The duo of Nijel Pack and Isaiah Wong could be the best 1-2 punch in the ACC. Throw in lanky wing Jordan Miller, and this backcourt transforms into one that’s comparable to last year’s squad, if not better.

The issues arise in the frontcourt, however. Arkansas State transfer Norchad Omier will help, but the loss of Sam Waardenburg and absence of a true center (besides true freshman Favour Aire) makes Miami vulnerable inside on defense. Miami isn’t the tallest team and doesn’t have the experience of other tournament hopefuls (just one senior on the roster). The experience factor can be looked past, but the height can’t.

With the questions down low, and Nijel Pack’s lethal three-point ability, it’s possible and even likely that the Hurricanes’ offensive philosophy strays further back than recent years. (Miami ranked 237th nationally in three-pointers attempted per game last season.) What does this mean for the roster? Isaiah Wong needs to hit a three consistently after connecting at just a 30.2% clip. Ditto for Jordan Miller and his 29.2% average. Perhaps the Hurricanes find another capable shooter on the roster. Bensley Joseph averaged 39.5% on just 1.1 attempts per game last season.

That’s one option. If Miami doesn’t change offensively, relying on shots inside the arc, it could work out as well if Omier plays as he did against the Sun Belt and A.J. Casey bursts onto the scene earlier than expected. Ultimately, however, it’s more likely the three-point shot becomes a focal point of the offense.

Defensively, Jordan Miller is great. The team’s leading rebounder (as a 6-7 guard, nonetheless) should anchor the D once again, and provide veteran leadership on the court as the team’s lone senior. Omier will anchor the frontcourt defensively after putting up 1.9 BPG and 1.6 SPG as a sophomore for Arkansas State last year. For a team that was already allowing over 70 points per game and letting opponents hit over 52 percent of their two-point attempts last year, there are still major holes.

Sam Waardenburg, Kam McGusty, and Charlie Moore are all gone from last year’s team, and all three are better defensively than Pack and Wong, who seem to be the team’s heartbeat this year. Look for Anthony Walker to provide a spark defensively. His per-40 numbers show a very good defender, with a 3.3% steal rate, superb for a big man. Walker and Omier, maybe A.J. Casey too, can provide quality defense down low for the ‘Canes, as can Jordan Miller at the wings. But as good as the offensive backcourt is, the defense will be lacking. Hopefully Bensley Joseph, Wooga Poplar, and Jakai Robinson can provide defense when Pack and Wong are out of the game.

The Miami Hurricanes should be a fun team to watch, but their limitations are clear. If everything goes right, they could find themselves back in the Elite Eight. But if the depth is tested or the defense falls flat, they could see themselves out of the Dance by the first weekend or not even get an invite.