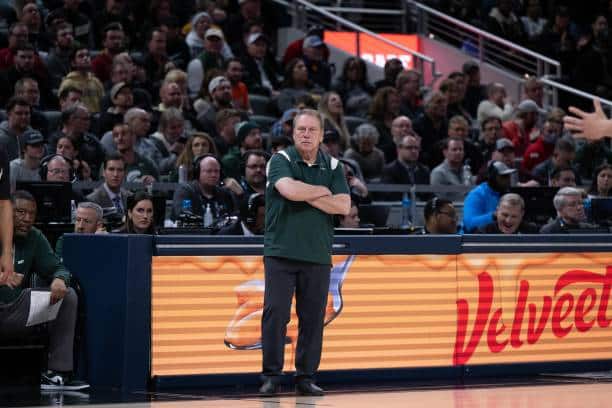 CBB Review is once again ranking the top 100 teams heading into the 2022-23 season. Each day we will reveal the next team until we reach the team slotted at number one. Coming in ranked number 30 are the Michigan State Spartans.

This year, the Big Ten has many question marks, with a handful of top-notch players either graduating or leaving for pro careers. It opens the door for teams like Michigan State – who is a bit unproven – to make a step and surprise some doubters.

This Michigan State Spartans team has some diamonds in the rough but will need to put up with a potentially thin bench due to inexperience. However, can you really count out Tom Izzo?

After a very promising freshman season at Marquette, Hauser followed it up with another decent year after sitting out one at Michigan State.

Last season, he took a bit of a step back, but should be counted on as a leader in the locker room and bucket getter on the court.

Without a doubt, Hauser’s best asset is his three-point shooting as a stretch forward/center. However, he’s a very underrated rebounder, can pass well from the post, and runs the court well.

I don’t see this Michigan State Spartans team as having one specific go-to guy, but because of Hauser’s experience in college basketball, it makes him the default choice here for Team MVP.

There have been so many great Michigan State Spartans point guards of the past and whenever Tom Izzo’s teams have been successful, they’ve been led by a great playmaking point guard.

Walker struggled in year one after transferring from Northeastern but will be on line to start again this season. It’ll be crucial for him to have a bounce-back year.

There were a lot of positives – Walker moved the ball well, connected on a healthy amount of his attempts from behind the arc, and showed that he belongs in the Big Ten.

However, I’d like to see more aggression out of the senior. This Michigan State team lacks proven scorers, and Walker did that at his old college. He doesn’t need to average 20 points per game, but if Walker can up the ante a bit more as a scorer, it could go a long way to determining whether or not the Spartans are a true contender in the Big Ten.

As I mentioned before, there’s a long list of great point guards and playmaking guards who played for Michigan State.

Needless to say, Tyson Walker has a ways to go before he cracks even the top ten all-time point guards at Michigan State. However, the squad Izzo brings back boasts Walker (4.3 assists), A.J. Hoggard (4.8 assists), and Joey Hauser (1.7 assists down low).

It’s a team that passed the ball well last season and brings back some of their best playmakers. That can only come in handy as a team with question marks surrounding who will step up and score the basketball.

While I’m not in love with this version of the Michigan State Spartans, there are a lot of reasons to back them in the questionable Big Ten.

The starting lineup features five guys who all played big minutes last season and were either full-time starters or called upon at one time or another during the season. Because of that, coach Izzo should have no problems one through five.

It gets a bit dicey off the bench, as it looks as if the Spartans might need to look to two freshmen – Jaxon Kohler and Tre Holloman – as the key role players.

Mady Sissoko and Pierre Brooks have gotten little playing time in their early Michigan State Spartans careers, but could very well turn it on this year with more playing time available. Jason Whitens is an experienced glue guy and Carson Cooper adds depth down low.

Without a doubt, it’s a Michigan State team on the younger side overall, but with vets in the starting lineup. The squad will be tested early and often, with non-conference games against Gonzaga, Kentucky, Villanova, Alabama, UConn/Oregon, and a third and final opponent in the Phil Knight Invitational. Notre Dame rounds out the gauntlet of the non-conference games, before a brief cool down to get them ready for Big Ten play.

Overall, you just can’t count out Tom Izzo, especially when he has enough on paper to make gold out of silver. He’s still one of the best at his craft, and it’s a Spartans team looking to prove people wrong after a couple down years for their program’s standard.