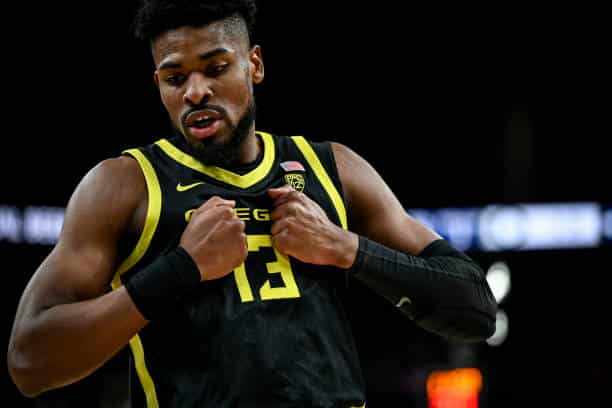 Dana Altman and the Oregon Ducks look to bounce back after a so-so season met that fell under expectations.

CBB Review is once again ranking the top 100 teams heading into the 2022-23 season. Each day we will reveal the next team until we reach the team slotted at number one. Coming in ranked number 32 are the Oregon Ducks.

Boasting a very talented lineup up and down the board, the Oregon Ducks fell a bit under their expectations last season. The Will Richardson and De’Vion Harmon combo didn’t work out as expected. Additionally, although have many top recruits down low, the Ducks were outside of the top 175 in rebounds per game.

This year, Richardson comes back to lead another talented group, once again concocted through the transfer portal. Dana Altman is one of the most seasoned head coaches in college basketball, so I’d bet on the Ducks turning it around this season.

Now in his fifth year with the Oregon Ducks, Richardson is ready for his sendoff. The former Oak Hill Academy product showed his potential from the start, averaging 6.0 points per game as a freshman on a team that won 25 games.

Since then, Richardson has been one of Oregon’s go-to players offensively, really taking over as the top dog last year. He decided to stay in Eugene for a fifth and final season and showed be on the very short list for Pac-12 Player of the Year.

There’s really not a lot to hate about Richardson’s game. He’s smooth with the basketball, being able to score points and make plays. At 6-5, he can help out on the glass and also makes a major impact defensively.

With talent all around the board again this season, it’ll be interesting to see if Richardson can level up even more.

For starters, N’Faly Dante is the starting center – no question about it. Right now, it’s expected that top-10 recruit Kel’el Ware will start alongside Dante, leaving Bittle to come off the bench alongside Lök Wur.

Of course, Bittle is just a sophomore and was a top-30 recruit in his own right. But with so many talented big men on this Oregon Ducks installment, it could leave little room for him to see a big increase in minutes.

However – Bittle didn’t transfer. That leads me to believe there will be an increased role carved out for him. It’ll just be interesting to see how Altman goes about it. No matter the case, it’s a big season for Bittle to prove himself, but also for the Ducks, to have three legitimate 7-footers on the roster.

Last season, the Oregon Ducks averaged just 12.2 assists per game, certainly on the lower end of the stick in college basketball.

It’ll also be key to follow that statistic this season. While Richardson clearly has point guard skills, I’d still argue that his more natural position is off the ball, due to his slashing skills.

Last season, Oregon ran a more fluid offense, with Richardson and De’Vion Harmon both serving as playmakers on the court at the same time. I’d expect to see the same this year with Richardson, Barthelemy, and Couisnard. If they can gel better, it would help the Ducks tremendously on offense.

With one of the best seniors in the country in Richardson, the Ducks’ ceiling is as high as any team in the country. Of course, there are still some pieces they’re missing that the top contenders have, but it’s still a roster that has three strong guards, exceptional post play, and a bench that should go at least nine deep in Pac-12 play.

The Ducks usually test themselves in non-conference play and it’s no different this season. Oregon will play home games against Houston and Nevada. They’ll also participate in the Phil Knight Invitational down the road in Portland, with a first-round matchup against UConn. After that, they’ll face off against either Alabama or Michigan State. Awaiting the Ducks in the third and final round would likely be Iowa State, UNC, or Villanova.

Despite no true road games in the non-conf, it’s clearly a very difficult schedule before hitting Pac-12 play. We should already have a great idea of Oregon’s identity and season potential by late November.

Another player to keep an eye on is Tyrone Williams. The junior led NJCAA in scoring last season at 27.7 points per game and could be a legitimate threat off the bench.

Should the transfer-heavy Ducks click from the start, they have what it takes to compete for a Pac-12 championship and enjoy success in March. There will be some pressure on key returning players like Richardson, Guerrier, and Dante to put last season behind them, but there’s no reason why the Oregon Ducks can’t be a dark horse to make a long run in the Big Dance.