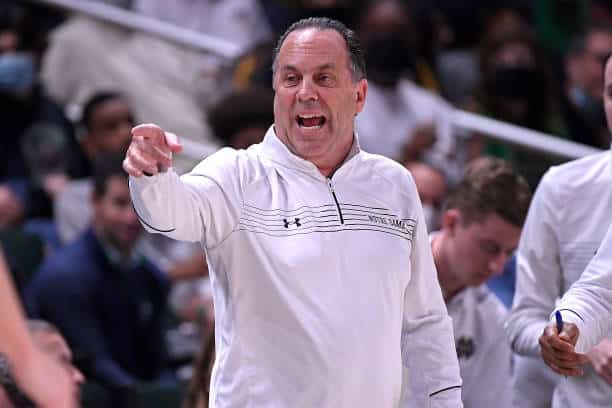 CBB Review is once again ranking the top 100 teams heading into the 2022-23 season. Each day we will reveal the next team until we reach the team slotted at number one. Coming in ranked number 42 are the Notre Dame Fighting Irish.

Going into last season, it had been five years since Mike Brey’s previous tournament appearance and he needed a spark. As the defense had been faltering, he brought in assistant coach Anthony Solomon, who specialized on that end of the court. Notre Dame finished with their best defensive efficiency (via Torvik) since that 2017 season, propelling them to a trip to the Round of 32.

Now, it is time to continue building. The Irish return an ideal combination of senior experience and young talent. They have plenty of potential to run it back and more.

Awarding an “MVP” was a difficult task as this team has a rather balanced roster. However, Goodwin is the most proven scorer at the ACC level.

The lengthy forward moves well away from the ball and is a lights out three-point shooter. Goodwin is also extremely efficient in transition. He finished last season shooting nearly 46% from three point range, averaging 13.6 points per game.

For as much experience as Notre Dame has, the NBA talent in J.J. Starling will determine their ceiling. As one of the top guards in the 2022 recruiting class, Starling is simply a bucket. He can shoot from the outside, get to the rim efficiently, and pull up with a series of mid-range jumpers or floaters. Like Blake Wesley last year, Starling will be given the keys to the offense and his progression will be vital.

The Notre Dame Fighting Irish ran a great offense by every measure last season. Part of this success was because of quality shot selection. Brey’s squad knew their strength…and that was outside shooting. They shot three-pointers on 42.4% of their shots, which was the highest rate in the ACC.

At the same time, they were the second most efficient team in doing so, accounting for a team 37.9% clip from beyond the arc. Plus, Notre Dame’s 54.0 eFG% only accounts for shots taken; they also turned it over at the 32nd lowest rate in Division I. Expect similar things from this year’s roster, that returns several of the same key pieces.

The Notre Dame Fighting Irish are in a good position to make another tournament appearance this coming season. In addition to the aforementioned players, Marcus Hammond was a superstar at the low-major level, and Cormac Ryan and Nate Lazewski are high-quality role players.

The only thing that can hold this team back is the lack of size. They may struggle with the premier post players in the conference and around the country. Laszewski (6-10) is the tallest player on the team but he functions better as a stretch four than a true center. True freshman Dom Campbell (6-8) does have some strength and may be asked to play a key role immediately.