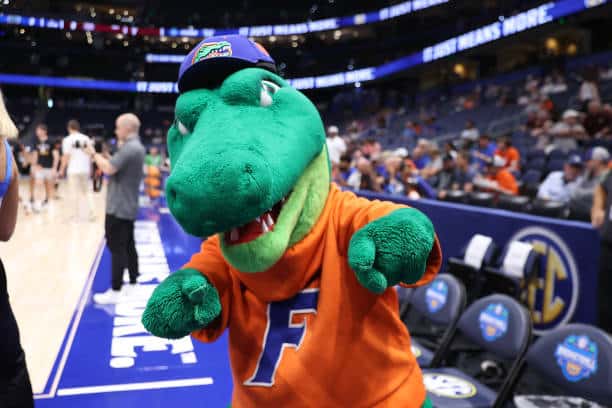 The Florida Gators will try and play around one of the best big men in the country, looking to compete in a difficult SEC.

CBB Review is once again ranking the top 100 teams heading into the 2022-23 season. Each day we will reveal the next team until we reach the team slotted at number one. Coming in ranked number 43 are the Florida Gators.

The Florida Gators have used the transfer portal as well as any program in recent years, landing Colin Castleton and Myreon Jones in back-to-back seasons. This year, they brought in Kyle Lofton and Alex Fudge, among a few other notable mid-major pieces.

If the Gators can find a way to gel their roster around Castleton, they have a deep team that could once again compete at the top of the SEC.

Some people are considering this the “Year of the Center” in college basketball. The Florida Gators fit that mold, with one of the most talented and experienced big men in the country.

Colin Castleton decided to come back to Gainesville for a fifth and final season. He’s become one of the most decorated players in Gators history, being named to the All-SEC team twice already in his career.

This season, Castleton has an experienced point guard in Kyle Lofton running the show. If those to can find a connection, it could be Castleton’s most dominant year yet. He’s got the talent to be the SEC Player of the Year, and with Lofton there to set him up, it could mean even more easy buckets inside for the Florida big man.

When Myreon Jones came to Florida from Penn State, it seemed he would be one of the main scoring factors. After all, he averaged 15.3 points per game on a Nittany Lions team filled with scorers, so it seemed like a no-brainer. However, Jones struggled to get going with the Gators, hitting just 35.5% of his shots and being pulled from the starting lineup at one chunk during the middle of the season.

Jones did show his scoring capabilities at the latter half of last season, dropping 26 against Georgia on February 9, and back-to-back 13-point games at the end of February and the first game of March. But his inconsistencies were also there, shooting just 5-for-27 over his last four games.

If Jones can revisit the efficient player he was at Penn State, it could really elevate a Florida Gators offense that could use a third scorer. Castleton is a lock to be the top option and Lofton should also be able to get it done. If Jones steps up, Florida can become one of the better scoring teams in the SEC.

The Florida Gators didn’t shoot the ball well from three-point range last season. In fact, the only power six teams that shot it worse from downtown were TCU, Mississippi State, Oklahoma State, and Missouri.

However, it gets even worse, because the Gators were 36th in three-point attempts. So, not only did they make very few of their shots from behind the arc, but Florida shot a whole lot of them too.

Call it streaky shooting or overshooting, it’s obviously a problem that needs to be addressed. Of course, Myreon Jones was in a slump most of last season. If he gets back to his old self, that could help a bit. But Lofton has never been a very efficient three-point shooter and will have the ball in his hands a lot.

It might get down to the Gators either focusing on improving from downtown or moving away from so many shots from outside and realizing that Castleton is the way to go most of the time.

The Florida Gators have a roster built around a dominant big man, with some interesting pieces that have the talent to be very key pieces, but just need to put it all together.

Role players like Fudge, Kowacie Reeves, Niels Lane, and CJ Felder could all very well step up to the plate and turn Florida into a serious contender in the SEC. Mid-major transfers Will Richard and Trey Bonham are also guys to keep an eye on. They could push for serious minutes, as they both starred for their respective teams, just at lower levels.

Finally, Riley Kugel is a freshman who could become a starter by the end of the season. He comes in with tons of talent, and there could be a bigger role for him as the season moves on.

The Gators will be in for a huge non-conference challenge, headlined by the Phil Knight Legacy. Their first matchup is against Xavier, with potential games against Duke, Gonzaga, Purdue, and West Virginia, among others. Florida will also travel to Tallahassee to take on Florida State on November 18. UConn and Oklahoma round out a daunting non-conference schedule, with Kansas State slotted in at the end of January for the SEC/Big 12 Challenge.

The Florida Gators will be a team to keep an eye on all season, as they have the makings of an NCAA Tournament team, but just need to prove themselves in a few key areas.