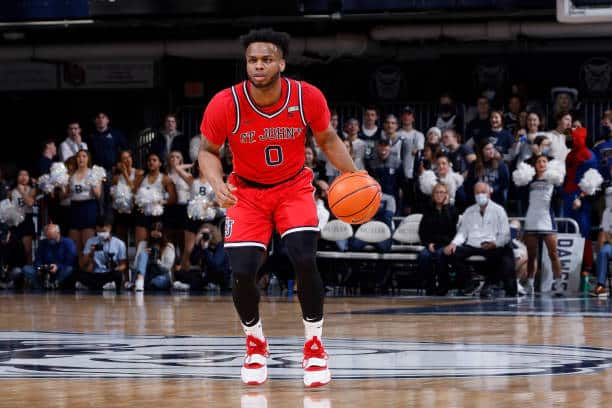 With some of the best guards in the Big East, the St. John’s Red Storm have the talent to stay at the top of the conference.

CBB Review is once again ranking the top 100 teams heading into the 2022-23 season. Each day we will reveal the next team until we reach the team slotted at number one. Coming in ranked number 50 is the St. John’s Red Storm

There’s almost no argument to be had – the St. John’s Red Storm has the best guards in the Big East. Posh Alexander, Montez Mathis, Dylan Addae-Wusu, and Andre Curbelo are seasoned players, each with playmaking talents.

Insert guard/forward David Jones from DePaul and St. John’s should also have no trouble replacing top scorer Julian Champagnie. Jones averaged nearly 15 points per game with the Blue Demons and will have better players around him to make life easier as a scorer.

The Johnnies are one of the most underrated teams in the Big East – largely because they’ve had good teams on paper in the Mike Anderson era, but haven’t put it all together. This year could change that stigma.

You want a dark horse to win the Big East Player of the Year? Take Posh Alexander.

The junior took the Big East by storm as a freshman, wreaking havoc as a defender and giving the Johnnies a true point guard with scoring abilities. As a sophomore, Alexander saw slight upticks as a scorer and passer and continued to dominate as an on-ball defender.

Expect the junior to continue to improve. The Red Storm no longer has Julian Champagnie, so Alexander will likely have even more freedom to attack the bucket and put up points. He still has an outstanding supporting group around him. I’d project Alexander’s stat line to be somewhere in the realm of 16 points, 6 assists, and 5 rebounds per game.

Efficiency, especially from outside the arc, has always been the issue with Alexander. While he’s shown that doesn’t matter, if Alexander can figure that part of his game out, the St. John’s Red Storm might have their first Big East POY since Walter Berry in 1986.

One of the most polarizing transfers in this year’s portal, Curbelo had a rollercoaster ride with Illinois.

As a freshman, he was the next best thing since sliced bread. He came in and nearly averaged 10 points per game while dishing out four assists and grabbing four rebounds per contest. But then sophomore year, Curbelo seemingly entered the doghouse. He missed 10 games due to a neck injury but was never reinserted back into the starting lineup.

Curbelo did struggle after coming back, only putting up double digits in points in four of his final 15 games. However, two years into his college basketball career, Curbelo still offers a lot to the game and has the potential to become even better. He’ll need to fix his three-point shot – just 16.9% from deep for his career – but as a playmaker and overall scorer, he can certainly get the job done and adds to the best backcourt in the Big East.

Last season, the Johnnies were slightly below average in three-point percentage, shooting it at 33.53% from behind the arc as a team. In the Big East, that was good for 6th out of 11th place.

However, the numbers show it could be a lot worse this season.

Champagnie, Coburn, and Wheeler were three of the Johnnies’ best marksmen, and all three are no longer with the St. John’s Red Storm program. Two players expected to handle a decent amount of the scoring were abysmal from three last season. Curbelo shot it at 17.6% from three last season. Posh Alexander was barely any better, at 21.7%. DePaul transfer David Jones also only connected on 29.7% of his attempts from deep last season. Montez Mathis was also below 30%.

That means Addae-Wusu (38.1%) is the sole St. John’s three-point shooter coach Anderson can rely on. Rafael Pinzon also showed signs of being a reliable three-point shooter, but only played an average of 10 minutes in 13 games last season. His role likely won’t increase a whole lot on a team that features a lot of experienced and overall more talented players.

So, the simple solution – get in the gym! Or, at least, don’t expect St. John’s to live and die from behind the line. They succeed closer to the bucket.

Not only is Posh Alexander a dark horse for Big East Player of the Year, but the St. John’s Red Storm are also a very good pick for a sleeper team in the conference.

While efficiency from the outside is a glaring issue, it’s still a team that can find other ways to score, and playmaking is a big strong suit. Four players averaged at least 2.4 assists per game last season.

The Red Storm will have plenty of games in the non-conference to gel as a unit. The only games that look like challenges are Nebraska, Temple, at Iowa State, and Florida State. St. John’s could end up playing Syracuse depending on the results with the Owls, which adds another tough game.

Of course, the Big East schedule is daunting, and that’s really what will show how great they can be.