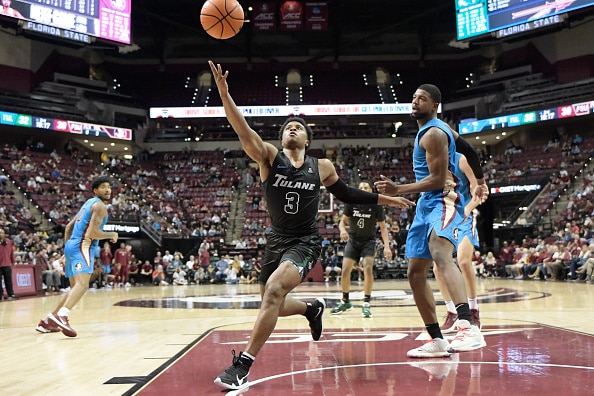 The Tulane Green Wave are ready to take the next step in the overhaul of the program under Ron Hunter.

CBB Review is once again ranking the top 100 teams heading into the 2022-23 season. Each day we will reveal the next team until we reach the team slotted at number one. Coming in ranked number 67 are the Tulane Green Wave.

The Tulane Green Wave are looking to do something they haven’t done in almost 30 years: make the NCAA Tournament. In fact, their last appearance came two conferences ago. The switches to Conference USA and then the American Athletic Conference have not been kind, but that outlook has changed with the hiring of Ron Hunter three seasons ago.

Last season the Green Wave finished above .500 in AAC play for the first time since joining the league, winning 10 games. The most promising part of that development is that the roster that accomplished this is young. It’s truly been a rebuilding process, but the fruits of the labor are starting to show.

Cook was a breakout star for the Tulane Green Wave last season. The former LSU product showed why he was worthy of playing in a power conference by leading the team in scoring. However, his talent extends far beyond, as Cook is complete player on both ends of the floor. He tied for the team lead in steals and was just 0.1 off tying for the team lead in assists as well. His performance earned him a place on the AAC’s first team, as he finished second in the league in scoring average at 18 points per game. Ron Hunter has found his floor general, and Cook will only continue to improve. A scoring average above 20 points per game is plausible in year two.

With the way the Tulane Green Wave roster has been built, there is a lot of promising young talent. That is especially evident in the guards on this roster. However, there is still some development to be had in the frontcourt aside from Kevin Cross. Enter Collin Holloway from Georgetown. Holloway started 20 games for the Hoyas last season, and can give Cross some help down low. Furthermore, he is a guy that is capable of scoring in double figures. If he can eclipse that average, you’ll have a rotation in which you have to figure out who to key in on for every possession.

Tulane relied heavily on its guard last season. That is evidenced in finishing almost dead last in offensive rebounding percentage. The Green Wave have a scrappy group who aren’t afraid to get in and grab rebounds, but it’s tough to box out guys who are taller and have more mass consistently. The addition of Holloway should help with this. If the Tulane Green Wave can even just improve this analytic by 100 or so spots, they should be able to use those second-chance opportunities to their advantage.

There should be a different type of buzz in New Orleans this season. The talent that Ron Hunter has compiled at Tulane started to show its potential last season. Jalen Cook is quickly elevating to one of the best players in all the AAC, while the supporting cast of Jaylen Forbes and Kevin Cross is superb as well. You could argue that the Green Wave snuck up on teams a little bit last season, but they should have everyone’s attention heading into this one.

The non-conference schedule sets up well to potentially finish with a winning record in non-league play. The best test for this group will come in a tournament in the Cayman Islands right before Thanksgiving. From there, it’s all about clawing their way through league play. The next sign of continued success would be securing victories over Memphis and Houston this season and finishing in the top four of the league. Consider this your warning that Tulane is going to make (green) waves towards an NCAA bid in 2022-23.