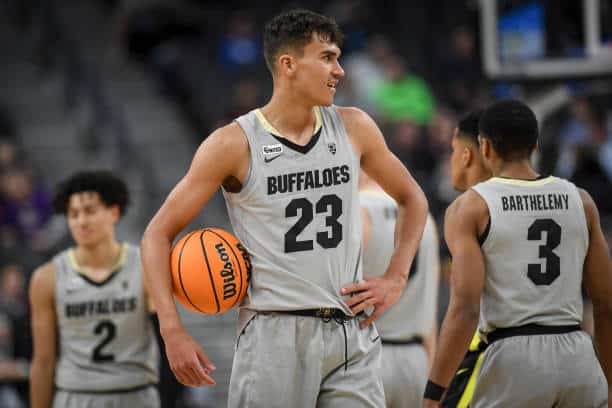 The Colorado Buffaloes flew past expectations last season and look to do the same with another competitive roster fit for the Pac-12.

CBB Review is once again ranking the top 100 teams heading into the 2022-23 season. Each day we will reveal the next team until we reach the team slotted at number one. Coming in ranked number 71 are the Colorado Buffaloes.

Despite losing one of the top players in the country in McKinley Wright IV, the Colorado Buffaloes rebounded for an exceptional 2021-22 season. They were led by sophomore Jabari Walker and senior Evan Battey, who led the charge of the Buffs into the NIT.

This season, Colorado does still return some notable talent from last season and has a roster full of redshirt freshmen who could be in for big roles. Two Ivy League transfers also pair up to give the Buffs some extra juice to work with.

2022 Postseason Finish: Lost in first round of NIT

On a team where Tad Boyle will need to figure out where many of the players fit on the depth chart, Tristan Da Silva is one of the few locks. Da Silva emerged from a minimal role on the bench as a freshman to an offensive asset for the Colorado Buffaloes as a sophomore. Now heading into his junior year, Da Silva has a chance to be the go-to guy for the Buffs, especially in the frontcourt.

On the early list of Pac-12 players to watch, Da Silva should be included. He can stretch to the three-point line but also gives the Buffaloes a force inside the paint. His older brother, Oscar, was a two-time All-Pac-12 performer, and Tristan’s sophomore numbers were very similar to Oscar’s at Stanford. There should be no surprise that he’s the guy to watch for Colorado this season.

Going with another frontcourt player, Lovering was behind senior Evan Battey on the depth chart in 2021-22. Battey was what Colorado expects Da Silva to be this year, so Lovering will be thrust into a much bigger role as starting center.

Last season, Lovering showed potential in the non-conference slate, going for 4 points and 7 rebounds in 17 minutes against Maine, and 6 points and 4 rebounds in 15 minutes versus Cal State Bakersfield. However, his season came to an abrupt end when he suffered an MCL injury during practice in late January.

Luckily, Lovering was able to recover from it in the springtime and should be more than ready to get past that injury and play a big role this season. With Da Silva expected to do most of the scoring in the frontcourt, it does alleviate some of the pressure from Lovering offensively. However, with his backup likely to be freshman Joe Hurlburt, Lovering will need to at least prove to be a presence defensively at 7-1.

Despite the game of basketball largely moving behind the three-point line, Tad Boyle’s Colorado Buffaloes don’t rely on scoring points from downtown. Last season, the Buffs were in the bottom 75 of teams at launching from deep. They were 9th in the Pac-12.

It’s really nothing new. Since hiring Tady Boyle in the offseason of 2010, Colorado has never finished in the top 150 of three-point attempts. He has an offensive style, and for the most part, it’s worked out.

A team built on defense and getting points inside the arc, the Colorado Buffaloes are set up for another successful season. KJ Simpson was a blessing as a freshman and should be on line to average double digits in points per game.

The Buffaloes are stacked with twos and threes including Princeton transfer Ethan Wright and Yale transfer Jalen Gabbidon. The two Ivy League stars combined for over 25 points per game last season and rebound well for guards.

Luke O’Brien and Julian Hammond III give Colorado even more guard pieces off the bench but will have to fend off fierce competition from the laundry list of players who redshirted as freshmen last season. Quincy Allen is the biggest name to watch, as he sat out last year despite being ranked in the top 100 of the 247Sports Composite.

The Buffaloes will have a few tests in their non-conference schedule with games against Tennessee, Colorado State, Arizona State, and UMass. How they fare against the Minutemen in the Myrtle Beach Invitational has the potential to set up even more intriguing matchups that includes Boise State, Loyola Chicago, Murray State, and Texas A&M.

Ultimately, if Da Silva can take over like we’re expecting him to, the Colorado Buffaloes have the talent to finish in the top half of the Pac-12 and secure an at-large bid to the NCAA Tournament.