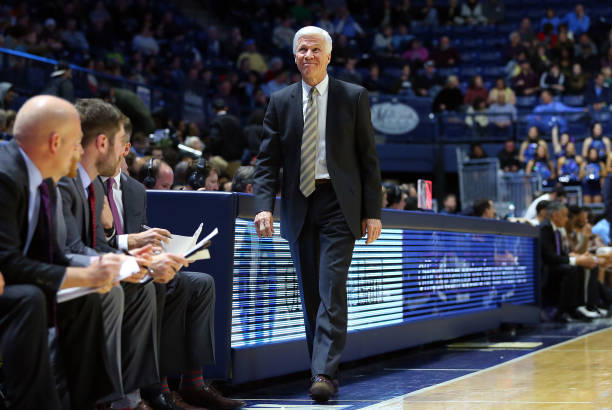 Bob McKillop will forever be remembered as the coach who put Davidson hoops on the map.

Whenever you can sustain yourself at a school for decades at a time, you have clearly done something right. In 33 seasons at Davidson, Bob McKillop racked up 634 wins, 11 regular-season conference championships, and 10 conference coach of the year honors.

This Friday, he announced his retirement from the game, handing the head coaching position down to his son, Matt. But McKillop’s legacy regarding basketball in the state of North Carolina will be everlasting.

Moving Up the Ladder

Davidson is a private liberal arts institution that holds merely 2,000 undergrads. Basketball in the region is emphasized, but the school has nowhere near the resources that the premier surrounding programs have. Without sacrificing any of Davidson’s academic prestige, McKillop rebuilt a nationally relevant program, essentially from the ground.

Over his career, McKillop oversaw the program’s transformation from an independent stepping into the Big South (1990-92), to the prized possession of the Southern Conference (1992-2014), to a highly competitive school in the Atlantic 10 (2014-present), filled with a rich history. He maximized his success at a school with a natural competitive disadvantage.

Of the many tournament appearances McKillop’s Wildcats made over this span, the 2008 run to the Elite Eight is what he will be most remembered for.

It’s simple: Curry changed the game. Nobody was able to shoot three-pointers with the volume, efficiency, and range that Curry displays. Even though he remains the world’s best shooter, Curry opened up an entirely new path for the game of basketball, one that is much more exciting.

Curry just led his Golden State Warriors to a fourth championship title, but every legend has an origin story. In this case, it was with McKillop and Davidson.

In 2008, the Wildcats ran the table in the Southern Conference, before getting to the NCAA tournament and making their mark there. Curry averaged 33 points per game, shooting over 44% from beyond the arc. In the process, Davidson took down the national brands of Gonzaga, Georgetown, and Wisconsin, before barely falling short to Kansas for a Final Four bid.

To this day, Curry credits McKillop for the consistency in his work ethic each day.

From a pure X’s and O’s standpoint, it is hard to find somebody that is more knowledgeable than McKillop. If there was one guarantee each game, it was that McKillop would outthink and out-scheme the opposing coach.

Throughout his career, he mastered the motion offense, preaching a wide array of concepts that boiled down to spacing and cutting. Think about watching Curry; not only is he a generational shooter but elite at creating the opportunity to get a clean shot.

Bob McKillop’s three primary principles are “attacking the attacker”, “movement and technique”, and “discipline before freedom.”

Think about how highly-regarded Virginia’s Tony Bennett and his Pack Line defense are. McKillop is essentially the Tony Bennett of offense.

A Five-Star Human Being

The phrase gets passed around a lot but there are not many people with the amount of genuine care and commitment that McKillop has for his players. A proud New York native, he goes about each of his tasks with unmatched diligence and toughness.

Bob McKillop is an icon in the basketball community and has provided more for the game than most realize. We wish him the best in the next phase of his life.