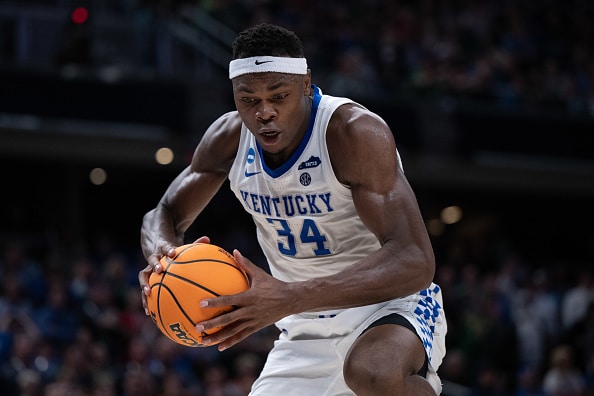 With the 2021-2022 College Basketball season two months in the past, it’s time to reflect on some of the incredible individual performances.

From high-level scoring outbursts, crazy minute totals, and some untraditional triple-doubles, here are the top 10 individual performances of the 2021-2022 college basketball season.

The Kentucky freshman pulled off a Rajon Rondo-type statline when he dished out 17 assists, an incredible number and the third highest assist total of the season. For reference of how impressive this is, his opponent, the Georgia Bulldogs only had 12 assists as a team. So, Washington had more assists than the entire team plus five to spare, which is extremely impressive.

The Big O joins his teammate Washington on this list of impressive stat lines of the 2021-2022 college basketball season. The college basketball player of the year pulled down a monstrous 28 rebounds against Western Kentucky. This is the most rebounds in a game by a player since the 2014-2015 season and like Washington out-assisted his opponent, Tshiebwe single handily outrebounded his opponent, which you can argue is more impressive.

Hitting 11 threes in a game is crazy, but doing it on 68.75% shooting is just nuts. Silverio was feeling it that day, taking just two 2-point shots but making 11 of the 16 threes. This was tied for the most threes made this season but on the best efficiency.

There’s so much to unpack in this performance. First of all, the 56 minutes, meaning he almost played a full game’s worth of minutes, plus an extra half. When a game goes 4 overtimes, that tends to happen. Next, you have to look at the 39 points, which is impressive, but what is more impressive that isn’t shown here is he didn’t make a single three. When you make 17 free throws that tends to be the case though. Finally, the 19 rebounds, which doesn’t sound crazy until you realize Seabron is a shooting guard. Overall, just a ridiculous performance.

McGhee has asserted himself as one of the best scorers in the country, and games like this are why. In this case, he put his team on his back, scoring almost half their points in a crucial end of the season conference play matchup. He did it on decent shooting too, shooting 50% from the field and almost going perfect from the line. At 5’9, he also proved that heart > height when he grabbed 9 rebounds in this matchup. Talk about doing what it takes to win.

When thinking of a triple-double, we think of guys like Russell Westbrook putting up double-digit points, rebounds, and assists. However, Walker Kessler likes to do things differently, doing so with points, rebounds, and blocks. In this game, Kessler did it on both ends, scoring at a high rate near the basket and preventing made baskets on the other end. This statline is impressive, but what’s even more impressive about Kessler is that he actually had another triple-double with blocks this season, and came one block away from having three, just crazy numbers for a defender.

Playing 59 minutes is straight up insane, especially when he did so in mid-February, which everyone knows is the home stretch of the season. Grant did so in this 4 OT match, most in college basketball this season, and 16 more minutes than the next highest minute player on the team. He used his time well, scoring 16 points with an equal number of rebounds, and almost getting the triple-double. The freshman then went on to play 40 minutes two days later, so hope he is enjoying the long recovery period.

Miami fans, watch this game if you want to get excited about your newest transfer. Omier was unstoppable in this one, scoring 23 points on just 12 shots and extending possessions with his 10 offensive rebounds. Having a 20-20 game is super impressive, and to do so with 26 rebounds is something else.

Only one player scored 50 points in a game this year, and that was Lee in this crazy game that ended 149-144 in 4 OTs. Start with his 54 minutes, which is crazy on its own, then add the 52 points on 0 made threes, the 27 free throws, and then the monstrous 18 boards and you’ve got yourself a charcuterie board worth of craziness.

Maybe this isn’t the best statline of the year but for sure the most impressive. We see so much in basketball these days high-scoring and low assist games, but how often do we see a performance with no made field goals and 20 assists? Now, this was against SAGU American Indian, a nondivision 1 school, but nonetheless is still something we never see and probably won’t see for a long time.