Ranking The NBA Finals Players By Their College Basketball Careers 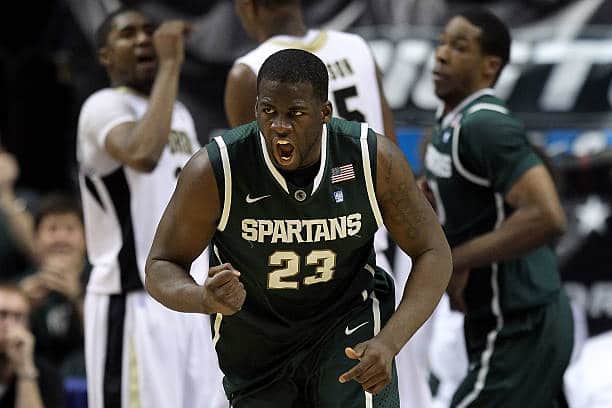 The NBA Finals consist of some of the brightest stars in pro basketball, but the hierarchy has changed some from their college days.

The Boston Celtics and Golden State Warriors meet in the 2022 NBA Finals. Both rosters are filled with NBA all-stars and many were also stars in the college basketball realm.

Known as just Juan Anderson in college, the Warriors role player is the perfect example of someone who worked on his craft and got the chance to deliver at the next level. Those numbers were from four years with the Golden Eagles, but even in his senior season, Anderson wasn’t much more than a three-and-d guy who could grab rebounds. He did become an everyday starter, but Anderson’s basketball journey didn’t really blow up until he reached the NBA. Now, the college basketball afterthought is playing in the NBA Finals. Crazy how that stuff works!

Kornet’s NBA value stems from him being named to the SEC’s defensive team for two years. However, Kornet was about your average college player, never breaking out into much of an offensive talent in his four years.

An above-average three-point shooter, Fitts was one of the best players in the West Coast Conference for the Saint Mary’s Gaels. Although, he played much of his collegiate career a bit under the radar, whereas a lot of these NBA Finals players starred throughout college.

By his statistics, White should be ranked much higher. But being a star freshman in the same year as Lonzo ball won’t exactly do you any favors. Colorado also finished just 19-15 and under .500 in the Pac-12. Of course, White can play and isn’t a stat-padder by any means. But it’s a lot harder to star as a freshman on a tournament team than it is on a team that missed the Big Dance altogether.

Like White, Nesmith had a crazy second year of Vanderbilt, but it’s a bit less impressive when it’s for a team that finished the season with an 11-21 record. Either way, no one else on this list averaged 23 points per game in a season, so Nesmith has that to brag about.

Morgan’s first two years at Indiana were nothing special, but he doubled his points per game to over 16 during his junior campaign and averaged about the same in one last year with the Hoosiers. Morgan never led those Indiana teams to anything special, but leading himself to an NBA Finals is certainly a nice accolade.

A one-and-done at UCLA, Looney just didn’t have the same star power as most one-and-dones. He drew a lot of NBA interest, but a back-down center averaging a touch over 11 points per game won’t draw the same hype as other stud freshmen.

The most feared defender in the SEC in his two years at College Station, Rob Williams was also one of the top big men in the country. His college play didn’t attract as big an NBA value as you might think, but he’s since found himself as a part-time starter with the Boston Celtics.

Damion Lee was a flat-out scorer in college basketball and that was proven when he transfer from Drexel to Louisville and saw barely any change in his numbers. Lee probably could have played at the ACC powerhouse from the jump, but was underrated coming out of high school and chose to stick with Drexel for the first four years of his career. It earned him a chance with the Cardinals for his fifth and final year of eligibility and that earned him a chance in The Association.

The oldest head on here, Iguodala’s college career was pretty underrated. While he only stayed two years, he improved so much from his freshman to sophomore season that it was enough to get him an NBA look. At 6-foot-6, he averaged just a few rungs short of a double-double for a Wildcats team that also featured four other future NBA players including Salim Stoudamire and Channing Frye.

Poole’s ranking certainly goes up due to one of the most memorable shots in the history of the Big Dance. The young Michigan star made Wolverine nation hold their breath as he beat the buzzer from just inside midcourt to help take down Houston in the second round. Aside from that, he was your typical promising college player. Poole didn’t dazzle on the stat sheet, primarily because he shared the floor with some other great talent. While his moment was one of the best in tournament history, the overall body of work wasn’t as great as some other guys on here.

I’m going to get some hate for this ranking, but Brown’s one-and-done season was more based on his overall potential at the next level than an other-worldly season. The Cal Bears star was the top frosh in his lone season, so that does deserve a nice round of applause. However, Brown’s star status has been made thanks to his commitment to getting better and becoming a flat-out star with the Boston Celtics.

I was a big fan of Hauser, who was a knock-down three-point specialist at Marquette. But something changed when he went to Virginia. I’m not saying the move wasn’t right for him, but Hauser certainly sacrificed a career year with the Golden Eagles to try and win a title with the Cavaliers. Either way, he was still a tremendous five-year college basketball star.

The difference between Moody and Iguodala is that Moody made a power conference team during his freshman season. While he might not have had the one-and-done superstar draw as a Jayson Tatum or Andrew Wiggins (who we’ll get to later), Moody still put up really good numbers for a freshman and was clearly one of the best players in the conference in his lone year with the Razorbacks.

Klay’s case is tough because no one had a good idea of what he could do or even who he was until he became a Golden State Warrior. Of course, there are those draft nerds that watch everybody, but let’s be real – there are better things to watch than Washington State basketball on a Saturday night. Given that, Thompson put up great numbers that clearly didn’t lie and translated right to the next level.

Overshadowed by the Hall of Fame career by his father, Gary Payton, the younger version was the top defender in the Pac-12 in both of his seasons at Oregon State. Payton II also led the Beavers in scoring both years in town, so he wasn’t just a one-trick pony. He’s arguably the most underrated college player on this list of NBA Finals guys.

Other players behind Big Al had better college numbers and more accolades, but being a key piece on a back-to-back winning title team means a lot. It is tough to decipher in college, and those Florida teams never primarily featured Horford, although he was a bigger piece during the second title run. I tend to favor All-Americans a bit more, but multiple rings put Horford in a good spot nonetheless.

Some people will laugh that Stauskas, an NBA benchwarmer, is ranked this high. If that’s the case, I suggest you study up! Stauskas was an All-American with Michigan and was one of the best, if not THE best three-point shooter in college basketball. He’s the classic college basketball legend that didn’t totally pan out in the NBA, although being on an NBA Finals team isn’t too shabby if that’s the case.

People forget how cold Otto Porter Jr. was in college but take one look at those accolades and you’ll remember. Like Iguodala, he blossomed from one year to the next, but to an even bigger stage. He led the last Hoyas team that was a contender in the NCAA Tournament, which today would translate to Patrick Ewing reincarnated. All jokes aside, Porter Jr. was a bucket and just because he didn’t translate into the scorer people thought he might become in the NBA, doesn’t mean he didn’t have a really solid college basketball career.

Much like Otto Porter, for a while, Smart’s NBA career made people forget about the dawg he was at Oklahoma State. Of course, Smart has turned into a better pro as the years have gone on, but his days as a Cowboys star were not to be reckoned with. For the two years Smart played in the Big 12, he was one of the top scorers and overall players in the conference.

Recency bias might play a little into this ranking but let’s not forget that the 2019 Tennessee Volunteers team was a favorite to win the national title. Williams also won the SEC Player of the Year award not once, but TWICE, something that surely separates him from plenty of competition between players who spent multiple years in college.

As a freshman at Duke, Jayson Tatum was brought into the limelight right away. Averaging those numbers as a freshman is one thing, but doing so under Mike Krzyzewski at Duke University is a whole ‘nother stratosphere. This rating might seem low, because of course, Tatum and Steph Curry are the top two players in these NBA Finals. But remember, other guys had better overall collegiate careers.

Given Andrew Wiggins’ career trajectory, people have begun to forget how special of a player he was in college. In actually all started before he got to Kansas – Wiggins was in the limelight for his high school mixtape long before becoming a Jayhawk. But think about this – Wiggins led KU in scoring during his one-and-done year and shared the floor with Perry Ellis, Joel Embiid, Wayne Selden, and Frank Mason. Tatum also played on a loaded Duke team but for Wiggins to be the guy on that team was a claim in itself.

It’s one of the toughest debates in basketball – comparing the one-and-done college hoops phenomenon against the four-year college star. On one hand, Jayson Tatum and Andrew Wiggins would have had ridiculous stats and accolades had they played four years in college. On the other hand, they didn’t need to, so you only have one year to compare against someone who did give so much back to the college game. However, in Pritchard’s case, he was pretty good from his sophomore to senior year. That’s why I go with the former Oregon Duck here but honestly, there’s no wrong answer.

The stats won’t tell the whole story and they never have with Draymond. His impact on the game has always been more than what any numbers can say. Even with that, he averaged a double-double during his senior season and was named the Big Ten Player of the Year. Green is the perfect example of someone who worked hard all four years of college and saw it pay off in the NBA.

What separates Curry from Draymond and earns him the top spot, for me, is the 2008 NCAA Tournament run. That will forever be remembered as one of the greatest Cinderella stories in March Madness history, and ultimately put Chef Curry on the map.