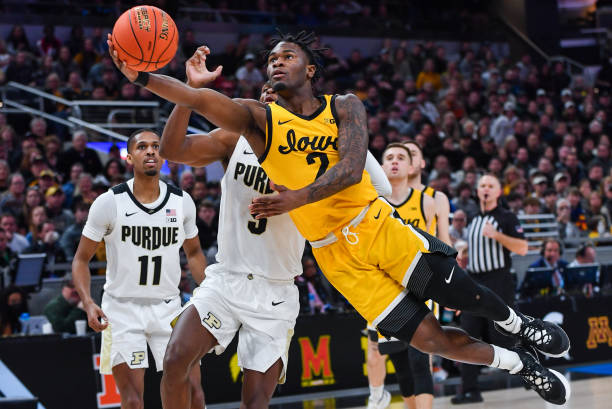 West Virginia adds an experienced guard in Joe Toussaint as the Mountaineers try and get back from a difficult 2021-22 season.

Joe Toussaint played three years with the Iowa Hawkeyes, solidifying himself as a key piece in multiple roles with the team. Toussaint played in 98 career games with Iowa, starting in 41 of them. The move to West Virginia could turn the fourth-year guard into a consistent starter.

Toussaint started his Iowa career with a lot of promise, starting in over half the games he played as a freshman. But in year two, things went south. The Hawkeyes contended with star center Luka Garza, but Toussaint was limited to a bench role, seeing his numbers dip down across the board.

The Bronx, NY native stuck it out under Fran McCaffery for one more year, once again becoming a part-time starter. Now, Toussaint will get a totally fresh start in the Big 12 with West Virginia.

How does Joe Toussaint fit in with West Virginia?

Let’s start off with the obvious. The Joe Toussaint transfer to West Virginia won’t grab as much attention as a lot of other moves around college basketball. He’s not an overly flashy player or a 25-point scorer, but Toussaint’s toughness and defense might remind Mountaineers fans of another recent point guard.

Of course, I’m referring to Jevon Carter. Toussaint has the same type of grit as an on-ball defender and can also push the ball into the lane and either go all the way to the hoop or pass out.

Toussaint can be known for his think-on-a-fly type plays. Along with the toughness and will to win that he brings, he’ll make some head-scratcher plays and won’t be the efficient player Carter was.

However, if you look at what Bob Huggins wants on defense, combined with a player who can move the ball around, Toussaint fits in just right. Since Carter graduated, West Virginia had only one top 40 showing in the KenPom adjusted defense ratings.

He’s not going to single-handily change the offense that West Virginia desperately needs, but Toussaint will help bring back the defensive pressure Huggins needs for his style of coaching to work.

West Virginia needs a lot more than just Toussaint to turn things around in Morgantown and Toussaint’s inefficiency will also leave some Mountaineers fans wanting more. What Toussaint does bring to town is a player with a chip on his shoulder who will defend whoever he’s asked to and at a high level. Defensively, it’s an A+ pickup. Offensively, it’s a question mark, but a change of scenery could also make a difference.