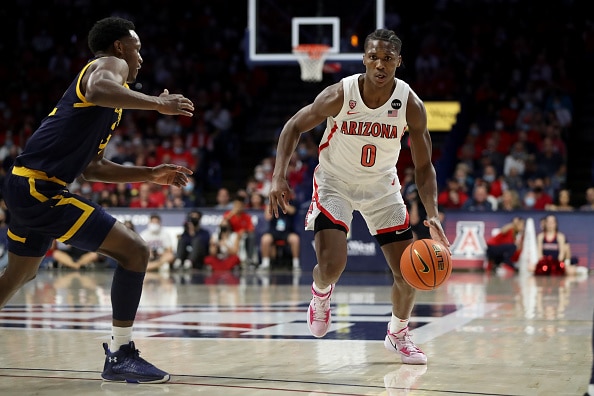 CBB Review hands out awards for each conference tournament. Up next: The Pac 12 Tournament.

After shooting 37% in the first half, Arizona boat raced the Bruins in the second half, en rout to a Pac 12 Tournament Championship.

First-year head coach Tommy Lloyd has earned his 31st win of the season, with all of the momentum toward a Monday night game in April.

The Wildcats had three players finish with over 15 points and got 50% of their three-point shots to fall.  Meanwhile they limited UCLA to shoot 5-of-22 from beyond the arc and outrebounded them, 39-32.

If nothing else from this tournament cements his name as Most Outstanding Player after this play, I’m not sure what else will.

Although the dunk didn’t count, it was well set in stone that Mathurin’s run in the Pac 12 Tournament was as impressive as that play.

He displayed his talent all over the court with seven assists, four rebounds and making 13 of his 15 free throws.

After leading the team in scoring on the season at 17.1 points per game, he backed it up in Las Vegas with three magnificent performances in the tournament.

The Wildcats have four players score in double-figures on average and have not had a bad stretch of basketball all season. They locked up a one-seed in the NCAA Tournament and a lot of credit has to go to the balance.

Ranking Top 10 in the country in offensive rebounding, rebounds, assists and blocks have been the key behind this team’s success. Adding the third-best scoring offense doesn’t hurt them.

I think I will be more surprised if they don’t survive through the second weekend. The ceiling for the Wildcats is high and a national championship is not completely out of reality.