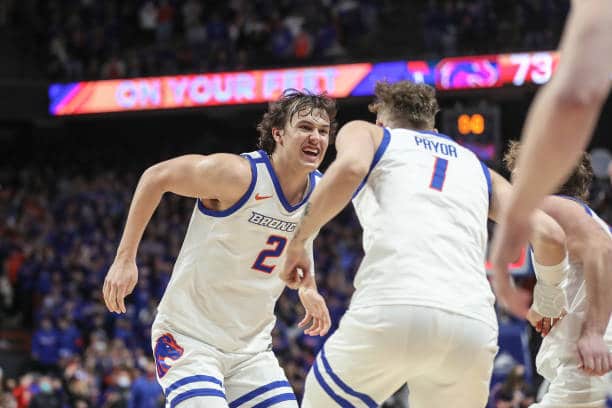 CBB Review hands out awards for each conference tournament. Up next: The Mountain West Tournament.

After a near-decade drought, Boise State is making its way to the NCAA Tournament. They defeated San Diego State, 53-52 on Saturday to win their first Mountain West tournament championship and their first bid to the big dance since 2014-2015.

The team has won a program-best 26 wins and has accelerated to the top of the conference under long-time head coach Leon Rice. It will be the Broncos’ eighth NCAA Tournament appearance and their fourth since 2008.

Although the senior from Ontario didn’t have the biggest impact in the title game, he has been a factor the entire tournament.

He averages 14.8 points and 5.8 rebounds on the season but had 22 points and six rebounds in their semifinal win over Wyoming and 11 points with six assists in the quarterfinals against Nevada.

Kigab shot over 45% from the field in all three games and had three or more assists in all the games. The team’s leading scorer showed up in big situations and helped close the Broncos’ first Mountain West Tournament championship and bid to the NCAA Tournament.

This is a team that can easily take out a team, purely off of what seed they get. Winning two in the big dance is not outlandish for a squad with so many strengths.

The Broncos have a legit scoring defense, with length and the ability to limit teams to get to the free-throw line.

It is the deepest the Mountain West has been in its conference history, with 3-4 teams that can legitimately win a game in the NCAA’s.

Fortunately for the Broncos, they will be the ones entering as the conference tournament champions.