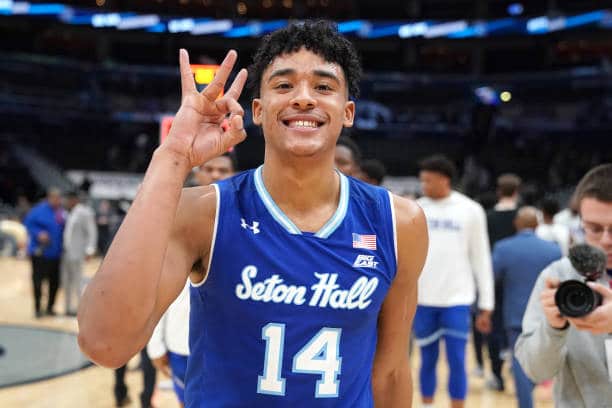 CBB Review highlights the ins and outs of every conference tournament leading up to Selection Sunday. Up next: The Big East Tournament.

The Big East conference once again showed why it belongs in the Power 6 of upper-echelon college basketball programs after another fantastic regular season. Realistically, the conference can have seven NCAA Tournament teams. Expect the Big East Tourney Champ to go through a dogfight to hoist this year’s trophy — even the sixth-place team has a chance to win the conference.

Each player will be crucial to their teams tournament success but the first player is the most important for his team.

Seton Hall is one of the most dangerous 9-loss in the country even with Jared Rhoden underperforming at times throughout the season. See his eight points against Nova, 14 against UConn then his near 20-20 games against DePaul. Rhoden secured First Team All-Big East honors and is capable of being the best player in the conference when he’s in rhythm. Seton Hall went 15-2 when Rhoden scored 15 or more, one of the losses came thanks to Ohio State’s Meechie Johnson Jr.’s game-winning 3-pointer with 2.3 seconds left.

When watching Providence play, their tenacious full-court defense and collectively solid offensive play is easy see. Coming into the season, many expected Nate Watson to be the main contributor, but not many saw junior guard Jared Bynum taking over as he did. Bynum went from averaging 5.8 points in his sophomore year to averaging a hair under 13 points per game this season. If the Friars need a bucket in crunch time, he’s their go to guy. Providence went 10-2 in games decided by 5 points or less, much of that has to do with how clutch Bynum is.

It’s crazy to think double-double machine Adama Sanogo is only a sophomore. The 2022 Preseason All-Big East Honorable Mention and 2021 Big East All-Freshman Team Center exceeded expectations this year earning first team honors and has shaped himself into a solid NBA Prospect. Expect Sanogo to anchor a talented Husky team and punish opponents in the paint.

If you took a look at Ryan Hawkins‘ career at DII Northwest Missouri State, you’d know that Blue Jays got a winner and an absolute steal in the transfer portal this past season. Hawkins won the national championship twice and lost in the championship game once. What’s been impressive is seeing how much he has caught fire over the last 8 games. The Blue Jays’ forward had games of 30 and 12, 25 and 11, 25 and 11 over that stretch averaging 19 points and 10 rebounds. Success in March is largely attributed to experience with skill and Hawkins has that.

There is no coincidence that Xavier lost every game sharpshooter Nate Johnson missed. Johnson, who leads the Musketeers with 41 percent shooting from deep, erupted for 25 points and drained 7 threes on senior night. Johnson adds another dimension to fast-paced Xavier offense that makes them that much harder to guard. Expect the Musketeers to lean on his shooting should they make a deep run in the tourney.

Seton Hall’s record to this point could be much better without injuries and the early missed games due to COVID-19 protocol. Almost two months ago, the Pirates’ primary ball-handler Bryce Aiken was dropping 20-pieces left and right before going down with his second concussion of the season.

From top to bottom, their roster is solid with bench pieces like Alexis Yetna and Jamir Harris who both averaged nine points per game. Even their current starting forward Tray Jackson came off of the bench early in the season. Any team with 10 rotational players who can all start is dangerous. Seton Hall ranks 28th in the country in adjusted defensive efficiency anchored by Ike Obiagu’s Big East-leading three blocks a game. The Hall closed out the season winning six of their last eight with both losses on the road at UConn and at Villanova.

Don’t be fooled by this 8-9 matchup, as these two are anything but close. Butler went 6-14 over 20 Big East games. Xavier played without their third best, and arguably most important player in Nate Johnson. Xavier lost 5 straight before Johnson returned on senior night — which they won. Xavier beat Butler twice in the regular season and won the second matchup although Nate Johnson only scored 4 points. Expect Xavier to advance as Johnson catches fire in this one.

It’s been a disappointing season for St. John’s, after the Red Storm were picked to finish 4th in the Big East Preseason Coaches Poll. All-Big East First Team wing Julian Champagnie and guard Posh Alexander should have no problems getting past the last-place Blue Demons.

Seton Hall got unlucky with their sixth-place seeding after finishing off the season so hot. Had Marquette lost the last game of the season, the Pirates would be in the five spot and have been playing Creighton. The Hall handles business here against the Hoyas who set a record with 20 straight losses to close out their regular season.

Winning the Big East regular-season outright is a testament of how good a coach Ed Cooley is for this Providence team. Throw the Big East Preseason Poll out the window, the Friars have a realistic chance at a 3-seed should they win the Big East tourney. If this game goes down to the wire the Friars will close and also, can win this one comfortably. Xavier will try to shoot the lights out but, the Friars force people not named Nate Johnson to make threes and will weather storm as they have done all season long.

The 4-5 matchup has all the makings of a one-possession game. Marquette is third in the conference averaging 75 points per game while being the best shooting team in the Big East. Creighton has the Big East Defensive Player of the Year in Ryan Kalkbrenner. The deciding factor will be who can win the low post action and this is where Ryan Hawkins enters the chat.

There isn’t much to nitpick at when it comes to the Villanova Wildcats, as Jay Wright continues to coach great teams year-in and year-out. Villanova has the sixth-best offense in the country, in terms of adjusted offensive efficiency. St. John’s might come out with energy in this one but the Wildcats win this one comfortably with stellar guard play from Gillispie and Justin Moore.

Seton Hall had the game in hand the last time they played UConn but fumbled away a win coming down the stretch. Two Goliaths will battle down low with Obiagu guarding Sanogo and Rhoden faces off against one of the best defenders in the conference in Whaley. Kevin Willard makes more adjustments than a chiropractor. Ultimately, that will be the way the Pirates scheme to make life difficult for two All-Big East first team players. Pirates’ bench will also be big in this one.

Neither team has been playing extraordinary basketball, but the Friars have made MSG their home in recent Big East Tournaments. This game will be decided in the backcourt, as both teams present inside challenges that should cancel each other out. So for that reason, I’m rolling with Jared Bynum’s squad.

The Pirates have lost two close ones to the Wildcats already this season, but it’s tough to beat a team three times. That’s especially true for a Seton Hall team that’s on a huge winning streak, and coming off a win over UConn. Pirates to the Big East Tournament championship.

I’m sure this wasn’t the Big East Tournament final you were expecting, but is it ever? Seton Hall and Providence are two teams in need of a slight boost to help seeding in the Big Dance and I believe the Pirates get it here. Without Bryce Aiken, it’s been a struggle, but Kadary Richmond has held down the fort and propelled the Hall in a new direction. Seton Hall wins four games in four days and takes home the title!