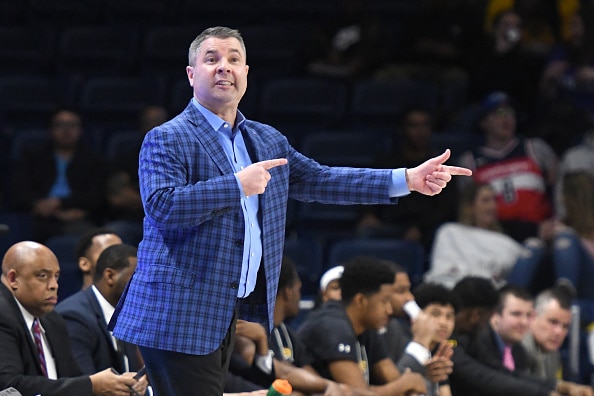 CBB Review highlights the ins and outs of every conference tournament leading up to Selection Sunday. Up next: The CAA Tournament.

The CAA Tournament looks a lot different than what league experts thought at the beginning of the season. Towson and UNC Wilmington finished tied for the regular-season title after both were picked near the bottom of the league in the pre-season. Now, the goal for those programs is to try and cap off their surprise seasons with a trip to March Madness.

Aaron Estrada was named the CAA Player of the Year after leading the league in points and assists per game. The Oregon transfer broke out in a big way, showcasing the talent that earned him honors as a freshman at Saint Peter’s two seasons ago. Meanwhile, Cam Wynter put up numbers that were just as impressive, and he’ll hope to replicate Drexel’s run from last year that took them to the Big Dance.

Jaylen Sims is one of the biggest reasons why UNCW was able to surprise the league this season. The senior guard has produced at high level for the Seahawks the past few seasons, and it finally paid off in helping the program achieve a title. Cam Holden represents the other team sharing that title, with the senior finishing in the top ten in the CAA in points, rebounds, and assists per game.

It wouldn’t be a tournament preview without fitting in the pre-season league favorite somewhere. Delaware was projected to win the conference after just about every key piece returned for Martin Ingelsby heading into 2021-22. There is experience in the backcourt with Jameer Nelson Jr. and Kevin Anderson. Meanwhile, if Dylan Painter can play at close to full health in the paint, he can swallow up rebounds at an impressive rate. Experienced teams find ways to win, and that’s exactly what Delaware is heading into this tournament.

Northeastern was one of the biggest disappointments in the league this season, winning just two CAA games. However, one of those came in a 34-point thrashing of William & Mary just last week, where the Tribe managed to score only 28 points. That recent performance tells me Northeastern moves on in this one.

Northeastern’s other league win was also Towson’s last loss back in early February. That makes this a tricky game for the Tigers, though they have been playing much better basketball since then. Towson avoids an early exit and moves on.

It wouldn’t be a true conference tournament without bitter rivals squaring off. Drexel and Delaware split this season, with each winning on the other’s home court. Both teams have been inconsistent this season, but I’ll give the rubber match to Delaware behind that veteran backcourt.

UNCW’s cross-state foes are one of three teams that gave them a loss in the CAA this season. Elon possesses a star weapon in Hunter McIntosh that can keep them in games. The Phoenix will be able to keep this close, but UNC Wilmington finds a way to move on.

These two squads are facing each other for the second straight time, with Hofstra grinding out a five point win this past Monday. The Pride swept the season series, though both games were extremely close. Hofstra is one of those programs you never count out in a conference tournament setting, so give me the Pride advancing.

Towson defeated Delaware in their final game of the regular season, though it was the completion of a suspended game due to poor court conditions. The Blue Hens actually held a decent lead that the Tigers erased once the game resumed weeks later. However, Towson is just too hot to fall at the moment. The Tigers go on to the championship.

These two teams have played some great games this season, so it’s only natural that they’ll have to break their split with a trip to the tournament championship on the line. Aaron Estrada shows why he’s the league’s player of the year in this one, sending Hofstra to the title game.

Towson swept Hofstra by almost identical scores this season, but the Pride have won eight of their last nine after their final defeat at the hands of Towson this season. The recent winning ways of both squads is what carries them to this game, but it’s Towson that caps off their storybook season. The Tigers get back to the NCAA Tournament for the first time in over 30 seasons.