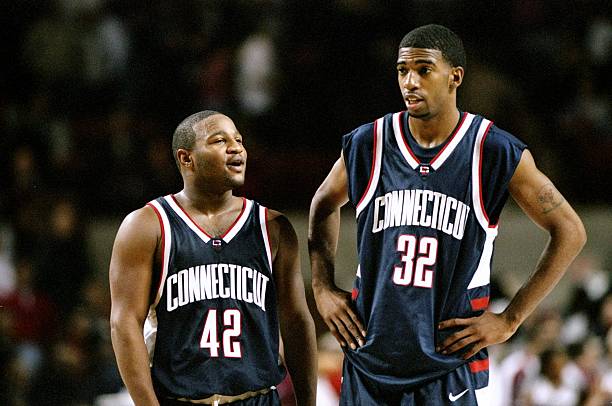 Seton Hall and UConn are two of the original Big East programs and have had plenty of all-world talent. Cutting the list to just 20 wasn’t easy.

Ray Allen might be the best spot-up three-point shooter to ever grace the floor. He was best known for hitting an iconic buzzer-beater to give UConn the 1996 Big East Tournament Championship.

Allen played in the prime of the Big East and was one of the premier players during the 1990s. Unlike so many of his Huskies teammates, Allen never did win a national title, but he did help pave the way for so many more to come.

Walker bloomed as a junior and had arguably the best single-season for any player in the Jim Calhoun era. He dazzled with a killer crossover and posed such a scoring threat as a point guard that opposing teams had no answer.

Walker led the Huskies on an 11-game winning streak to take home their third title. He’s a fan favorite and often gets overlooked by some of the “hey-day” players, but those junior season stats say it all. Had he stayed another year, we could be talking about Kemba as one of the 10 or 15 greatest college basketball players of all time.

Ray Allen paved the path for Richard “Rip” Hamilton to have the career he had in college. Many would say Rip is the greatest UConn player of all time and you’d be right in saying that. He had some of the best offensive tools in Big East history.

Hamilton led UConn to its first national championship and conquered the rare feat of being named Big East POY twice in his career.

What stands out is Dehere’s longevity at the top. He was a three-time All-Big East performer with the Pirates. Dehere was a bucket getter from day one, just coming to campus one year late from the 1989 National Championship game run. Dehere was the best player in the PJ Carlisemo era, which is no small claim to fame.

Myles Powell did everything but make a tournament run, which is even unfair to degrade him, given his best chance – 2020 – got nixed due to COVID-19. The Pirates were on pace to get a three of a four seed when the tournament got canceled.

But people exactly how great the Jerry West Award winner was. Powell was the best shooting guard in the country his senior season, and that’s saying something considering how much statistically better MP’s junior campaign was. No way around it. He was a special talent and one of the best scorers in college basketball in the last decade.

As far as defensive centers go, Okafor might be one of the best the Big East has ever had. He controlled the paint the minute he got to Storrs and didn’t look back, winning two Big East DPOY awards with the Huskies.

Okafor improved on his scoring for by his junior season, averaging over 17 points and 11 rebounds on his way to being drafted second overall in the 2004 NBA Draft.

Okafor was followed up by Ben Gordon, who went third in the ’04 draft. Gordon was more of the scorer on a Huskies team that would bring Jim Calhoun his second national championship. Gordon could make it happen from all three levels scoring the basketball.

The rebounding king after Derrick Coleman, Angel Delgado was once quoted as saying, “I love rebounds.” He sure did, ripping down double-doubles and setting program and conference records on the boards.

Delgado became a skilled offensive player in the paint, using pump fakes and size to give the Hall a weapon on both sides of the floor. He was a part of Kevin Willard’s first great recruiting class.

Many still consider Dukes the best player in Seton Hall’s history. Say what you want about a different era, averaging 20 and 20 over the course of a three-year career is ridiculous. Dukes was an All-American on the national level and led the Pirates to the 1953 NIT title, which back then, was the equivalent to the NCAA Tournament of today.

A streaker shooter, El-Amin was actually still a consistent player over the course of his career. His stats stayed the same throughout and they were darn good – El-Amin could light it up as a scorer but was also a crisp passer, serving as one of the better distributors in the Big East at his time.

Hazell didn’t reach the level of national prominence as many of the other guys on this list, but he was still one of the better players in SHU’s history. Hazell put up an outstanding sophomore campaign, and still averaged over and around 20 points for his next two seasons, even as defenses keyed in on him. Hazell became a defensive guru, playing both sides of the floor and pilfering well over two per game in 2010-11.

To a bit of a lighter extent, Napier followed in Walker’s footsteps and delivered and second national title for the Huskies as their lead point guard. Shabazz learned from Walker’s 2011 run and completed his own in 2014, becoming an All-American in the process.

One of UConn’s first stars, Smith turned into the best statistical scorer the Huskies have ever had. And when you lead a team like UConn in that category, it’s got to mean something. He made three All-Big East teams in his college hoops career.

If you single out the best single-seasons in Big East history, Donyell Marshall’s 1993-94 campaign has to be right at the top of that list. Marshall messed around and put up 25 points per game, nearly averaging a double-double, and blocking shots at an alarming rate. It earned him the conference’s POY and DPOY awards in the process.

What might seem like an unpopular pick shouldn’t be to those who know UConn’s history. Tate George is considered by some to be the best all-around point guard in UConn history. If you know the list he’s going up against that’s a big statement, but George ranks second all-time in career assists and steals at UConn. He also hit one of the most memorable shots in college basketball history.

Going back quite a bit again might seem like a cop-out, but UConn’s history was a blue blood between the 1990s and 2010s, whereas Seton Hall’s goes back quite further, peaks in the 1990s, and again as of late. Werkman was one of those old-school guys that put up such absurd numbers he’s impossible to keep off this list. He topped 2,000 points with ease in three seasons.

Scott Burrell is one of the best defenders in UConn history but didn’t shy away from scoring or getting his teammates involved. It earned him a decent run in the NBA but one of the most underrated Huskies certainly had his moments under coach Calhoun.

When I went to my Seton Hall orientation day in the summer of 2016, the NBA Draft happened to be on and Whitehead went mid-second round. Admittedly, I was still learning about the history of the Pirates, but it was easy to tell how much Whitehead meant to the program. He put Seton Hall on his shoulders and led them to an improbable Big East Tournament championship. Had he stayed another season, the Pirates would have been Final Four contenders.

Marcus Williams barely played his first season and was never much of a scorer, but averaged an incredible 8.6 assists per game in the 2005-06 season that took UConn all the way to the Elite 8. He did win a championship in year one, and that obviously had a lasting impact.

The third-ever Big East Player of the Year, Callandrillo was a lethal scorer all throughout his college career who brought it to an even higher level his last go-around.