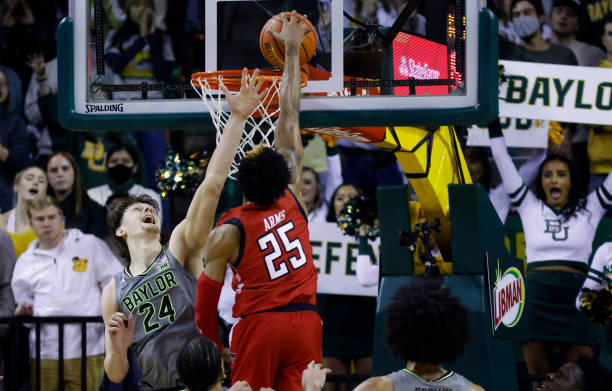 Baylor fell for the first time since March 2021 on Tuesday, 65-62 against Texas Tech.

The Bears were locked in a typical low-scoring battle against the Red Raiders for most of it. Ultimately, Texas Tech upended Baylor, making it loss number one on the season.

Stepping into a leadership and veteran role, senior guard Matthew Mayer was supposed to take the lion’s share of production, especially on offense. However, that has not been the case this year and that was apparent against the Red Raiders.

Mayer is averaging 8.6 points per game on 29.8% from beyond the arc. He finished with 10 points tonight on 3-of-10 from the field. It’s just his seventh game in double-figures on the year.

Junior guard Adam Flagler and senior guard James Akinjo continued to carry the load with 17 points apiece. However, Mayer has not been the expected offense people expected.

Takeaway #2: Mark Adams should be receiving all of the Coach of the Year praise

America is going to run out of adjectives for Mark Adams by February 1st.

Without his top two scorers against arguably, two top 10 teams, Mark Adams has done nothing, but motivate his players and did the unthinkable of taking down Baylor and Kansas in back-to-back games.

The culture that Scott Drew built at Baylor is the one that is gracing a lot of attention. Mark Adams and what he is doing at Tech is astronomical.

The Red Raiders shot 50% from the field, led by guard Adonis Arms, who put the exclamation mark of a performance with a dunk on Mayer.

Texas Tech is white-hot right now and cemented themselves in the thick of the Big 12 title race.

Takeaway #3: The Bears faltered down the stretch

What has made Baylor feel so dominant is the second half, where the Bears create a ton of offense and switch the momentum.

However, Texas Tech outgained them 39-31 in the second half and got great production from five different players.

Baylor did not have that on Tuesday and Tech took advantage of it.

This game won’t be a massive knock on the Bears season so far, but better yet a signal to the rest of college basketball, that the Bears are mortal and the Big 12 is officially open.

Baylor will stay home on Saturday against Oklahoma State. Texas Tech will return home for a game Thursday against the Cowboys.