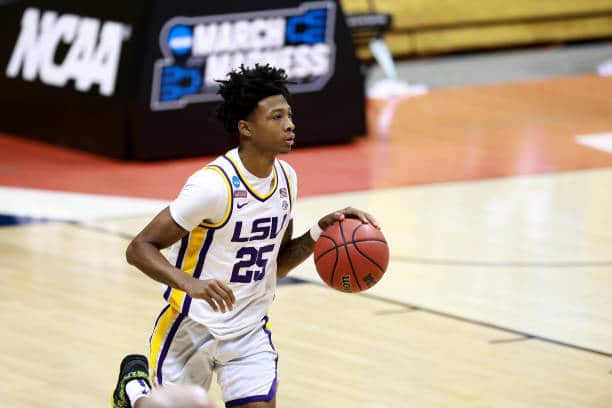 Snow has blanketed a good portion of the country as far south as the Tennessee/Alabama border. How poetic would that have been if those two SEC basketball teams played each other this Saturday? Alas, they do not!

However, for those who make a date with the couch and channel surf for the majority of the day, first off we love and are jealous of you, and secondly, there are a plethora of quality college basketball games on Saturday, January 8 to focus your attention on.

Read on for the best three games from the power conferences for Saturday, January 8, 2022, with what’s at stake for each game.

What’s At Stake: First place in the ACC, which ironically is held by Miami (4-0) despite the fact Duke (2-0) is the No. 2 ranked team in the country. The Canes can score the ball with the best of them. Do we need to set an upset alert?

What’s At Stake: A 1-3 start in league play for the Seminoles versus a 5-0 start for the Cardinals. Louisville is starting to break through as a potential NCAA Tournament team.

What’s At Stake: A second loss in league play for both teams. Both have struggled at times but this could also get the Tar Heels a bounce-back win.

What’s At Stake: Texas Tech is on the verge of being a top-20 nationally ranked team, but a loss here will put them 0-2 in league play. Kansas looks to add to its already top-notch resume.

What’s At Stake: Moving above .500 in Big 12 play as both teams enter 1-1 after two games. The Sooners are playing great under Porter Moser and more people are starting to become believers in Oklahoma.

What’s At Stake: Last place in the Big 12 as both teams enter winless. Kansas State is starting to trend up a bit – note our Big 12 power rankings. The close loss to Oklahoma showed the Wildcats improvement from last season. West Virginia needs to earn some respect back after the big loss to Texas.

What’s At Stake: A third Big East loss for the Pirates, who face UConn who is playing its first game since December 21 due to a COVID pause. Seton Hall is getting closer to full strength, but the Huskies are in the same spot the Pirates were in two weeks ago.

What’s At Stake: Basically, first place in the Big East as St. John’s has won its only league games and the Friars are 3-1 to start Big East play. Providence got annihilated by Marquette last time out but the Johnnies had one of the longest COVID pauses in the country.

What’s At Stake: A chance for DePaul to legitimize its 9-1 start. However, the Blue Demons have lost three straight Big East games. Villanova, meanwhile, gets a nice tune-up game.

👀 @umichbball and @MSU_Basketball renew their rivalry on Saturday.

So we got @JuwanHoward and Tom Izzo to say some nice things (sort of) about each other’s programs before tipping off 😂 pic.twitter.com/VNn1TlVQpx

What’s At Stake: UPDATE: THIS GAME HAS BEEN POSTPONED

What’s At Stake: A third loss in Big Ten play for both teams. Purdue enters the game with a 1-2 league record, which doesn’t even seem real, while Penn State is 2-2. It’s a MUST win for the Boilermakers.

What’s At Stake: A chance for both to get a win after losing their last games to Penn State and Indiana respectively. E.J. Liddell is due for a big game.

What’s At Stake: A top-four placement in the early league standings and a chance for UCLA to get back in the win column after a 24-day Covid pause. Nearly a month off, even a game against Cal won’t be an easy one.

What’s At Stake: UPDATE: THIS GAME HAS BEEN POSTPONED.

What’s At Stake: A chance for Colorado to jump into the top four of the Pac 12 standings. The Buffaloes are a legit team but are jumbled up with all the other three-loss teams.

What’s At Stake: A win in the primetime slot for one of the best games in all of college basketball today. Who said the SEC was just a football conference?

What’s At Stake: A third loss in a row to start SEC play for the Hogs, who have dropped decisions to Mississippi State and Vanderbilt. Texas A&M is flying under the radar and could jump into the top 25 on Monday with a win today.

What’s At Stake: Bragging rights in the Egg Bowl on the hardwood, until they meet again on January 22, 2022.