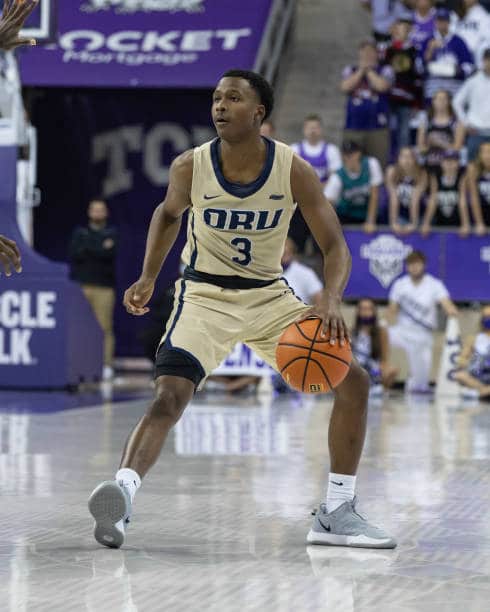 Some college basketball programs will remember these games forever and others can’t wait to forget in 2022.

One of the best things about college basketball is the ups and downs of the season. Many of the ups are underrated teams coming up with resume-boosting or even program-altering wins. On the flip side, teams favored to win ‘easy’ games falter once and the fate of the season is in question.

In 2021, we saw a little bit of everything. Like most years, in-conference upsets are the usual. There’s also the occasional non-conference upset, which we’ll get to in a few *cough cough Kansas*. But last March, the madness was at its peak, with a 15-seed surviving multiple rounds and capturing America’s heart. I remembered like an elephant (and Googled) for the top upsets in college basketball that took place in 2021, with some self-judging on which teams truly deserved to make the top ten.

Iona came into this game undefeated and ever since this upset hasn’t let up. The Gaels are for real. But this was really the first game of the 2021-22 season in which a top-ranked team lost to an unranked mid-major.

It’s also surprising because there seemed to be fewer guesses on how good the Crimson Tide were coming into the season. It’s a veteran team, mixed with some incredible younger talent, and an all-world coach. Rick Pitino and Iona were able to shut Bama down to a (then) season-low 68 points.

Bama’s lost to Memphis and Davidson since, but with wins over Gonzaga, Houston, and Tennessee, it’s hard to discount how good they are and how big of a win it was for Iona.

The Hoyas made an improbable run to become the 2021 Big East Tournament champs. The hardest win on that run was against 14th ranked Villanova in the quarterfinals.

Georgetown didn’t play a perfect game – they committed twice as many turnovers as Jay Wright’s club did. But the young Hoyas kept it close and won the game on two Dante Harris free throws with less than five seconds to play.

Qudus Wahab helped Georgetown to outrebound Villanova, and the Hoyas were also a perfect 23-of-23 from the charity stripe. It propelled them to the Big East championship, but as far as college basketball upsets go, no one saw this one coming.

Rutgers was picked to finish in the top half of the Big Ten this season, but at this point were hovering just above .500. One Ron Harper Jr. halfcourt heave later and the Scarlet Knights knocked off their conference foe at the buzzer.

Harper Jr. accounted for 30 of the 70 Scarlet Knights points and 10 rebounds got him the double-double. But defensively, Rutgers stepped up to the challenge, limiting sharpshooter Sasha Stefanovic to 3-of-10 from the field and the Boilermakers to only 41.0% for the game.

Rutgers is still only 7-5 on the season but this win keeps them in the conversation for the NCAA Tournament and was by far the craziest last-second upset of 2021.

College basketball hasn’t had many teams better than Houston in 2021. In fact, the Cougars went 32-5 during the calendar year.

One of those losses came to an American Athletic Conference opponent in the East Carolina Pirates. ECU entered at 8-6 but boasted Jayden Gardner, whose presence is now being felt in the ACC with Virginia. Gardner erupted for 21 points, 15 rebounds, and 4 assists, and was too much for Houston to handle, as East Carolina took it by nine points.

The Cougars shot under 40% from the floor and were torn apart on defense, with 20 assists in the game for the Pirates. East Carolina also made 11 threes, three of them coming off the bench from Bitumba Baruti. It was a near-perfect game for ECU and an outcome that no one in college basketball could have predicted.

I wanted to stay away from power conference regular-season games as much as possible because those are bound to happen. But when it’s a top ten team losing to the Wildcats – who lost to a Division II team in 2020, it has to be on this list.

K State went just 9-20 on the season and none of its wins even came close to this one. In fact, believe it or not, this was the Wildcats’ only win in the 2020-21 season that came against a team that finished above .500 on the season. So for that to also be against the number seven team in the country is incredible.

It was a low-scoring game – 62-57 – and former walk-on and East Catholic (CT) product Mike McGuril drained five threes on his way to a 19 point, 7 rebound game. Austin Reaves’ 25 points weren’t enough for an Oklahoma team that made just four threes all game.

The Flyers really had no business winning this game given their start to the season. Dayton had already lost to UMass-Lowell, Lipscomb, and Austin Peay, but was coming off a win with possible momentum over Miami (Fla).

It took five players to score in double-digits and a one-point win, but Dayton fought for the win and got it done for the unthinkable upset. The Jayhawks hit just four threes and were outrebounded by eight. Despite 20 turnovers, the Flyers played good enough defense to keep Kansas to 73 points. Then a Mustapha Amzil jump shot at the buzzer completed the wild night in November.

It seemed like Drake wasn’t going to lose a single game in 2020-21, and if they did it would either be against Loyola-Chicago or in the NCAA Tournament. Both of those rang true but so did a 17-point loss to Valpo in February.

It came after Drake won by just three points in a close one over the Crusaders. In the rematch, the Bulldogs couldn’t have played a worse game overall.

Drake shot 36.5% from the field, 13.3% from deep, and couldn’t even make it up at the line, going 9-of-17. The Bulldogs only led in one major category with 40 rebounds, but Valpo still pulled down 37, so it didn’t end up making a big enough difference. Valpo capitalized on the poor shooting night and anything can happen against conference teams, but given the Crusaders finished 10-18, this game wasn’t expected by nearly anybody.

*Note: Valparaiso is now nicknamed the Beacons, but were the Crusaders last season

Texas Southern was lights out, shooting 54.4% from the field. Florida was the opposite, hitting less than 40% of its shots. Even though the Tigers turned the ball over a massive 22 times, it didn’t matter. Florida simply didn’t come to play and a winless team walked into Gainesville and left with an eye-popping victory.

Now we get to some special March Madness games. Texas was a popular pick to win it all thanks to a roster filled with seniors and talented scorers. But the Longhorns couldn’t get out of the round of 64.

Texas couldn’t buy a bucket against the Wildcats, losing in a low-scoring battle, 53-52. No Texas player finished with more than a baker’s dozen and despite the leading scorers for Abilene Christian both only scoring 11 points, the Longhorns just couldn’t overcome their poor shooting night.

Perhaps even worse, Texas blocked nine shots, showing effort on defense. But 23 turnovers a college basketball win or go home game just won’t cut it and now the Longhorns are going to have to overcome a bit of some embarrassment this March.

Maybe we pay too much attention to seeds because I think most can agree that Oral Roberts was a more talented team than Abilene Christian and so was Texas compared to Ohio State. But the sheer improbability of a 15-seed over 2-seed upset in college basketball had to give 2021’s Cinderella team the number one slot.

Kevin Obanor and Max Abmas combined for 59 points and absolutely took over this game from start to finish. E.J. Liddell didn’t back down with 23 points, 14 rebounds, and 5 assists, and the Buckeyes really didn’t play an awful game. They just ran into a very little-known about team that just so happened to have two walking buckets on its roster.

It was the college basketball upset of 2021 and we look forward to another of its kind in 2022! (unless you’re Ohio State)