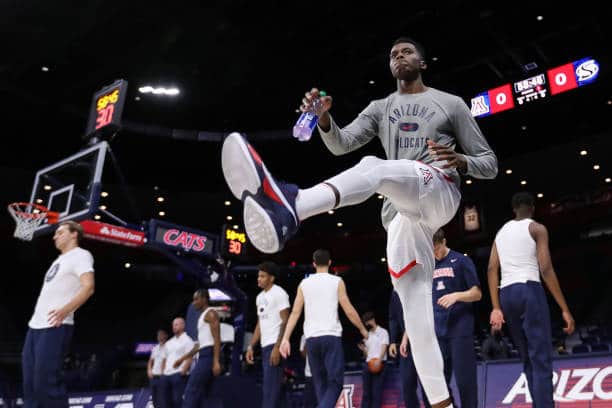 Arizona basketball withstood a 19-0 run by Illinois in the first half and still emerged victorious in their first true road test of the season.

Arizona’s Benn Mathurin came into this season as a fringe first-round pick with upside. After tonight’s game, he has cemented himself as a sure-fire lottery pick in next year’s draft. Mathurin finished the game against Illinois with 30 points, after starting the game cold, and made big shots when the Wildcats needed it. Mathurin’s shooting also got Arizona back into the game after they went down by double digits in the first half.

Mathurin is becoming the go-to scorer for Arizona when they need a basket. He is not afraid to shoot the ball in any situation. His season average of 18.4 points per game puts Mathurin at third in the Pac 12 in scoring. Mathurin is the type of player the Wildcats will need come March when they get down early or have their backs against the wall against great opponents.

Takeaway #2: Kerr Kriisa is becoming the leader the Wildcats need.

Arizona’s hot start can be attributed, in part, to their sophomore point guard’s leadership and intensity. Kriisa played every minute for Arizona against Illinois and hit back-to-back three-pointers which were part of a 9-0 second-half run that put the Wildcats ahead. Kriisa only went 2-of-8 from three in this game, but the two that he did make were huge at a time that Arizona basketball was desperate. He is also commanding the game as an elite passer and finding open teammates for easy buckets. Kriisa is averaging 5.2 assists per game on the season, which is best in the Pac 12 so far.

Apart from his stats, Kriisa has been the emotional leader for Arizona this season. His energy throughout the game kept his teammates from deflating. He has been the engine for this team all season long. The rest of the Arizona team feeds off of him. Every team needs a player who can be a spark plug and light a fire under the rest of the players when needed, and that is what Kerr Kriisa has done for Arizona this season.

For most of the game, Arizona basketball was able to contain Kofi Cockburn. However, even without Cockburn contributing his usual stats, Illinois took Arizona to the wire and nearly pulled out the victory.

With the injuries to two key players Andre Curbelo and Austin Hutchinson, Illinois was still able to hit big shot after big shot and always had an answer after Arizona scored. Illinois as a team shot 45 percent from three for the game, due largely to the play of their guards Trent Frazier and Alfonzo Plummer, who had 27 points and 25 points respectively, each making six threes apiece. When Illinois is back to full strength with Cockburn playing at his highest level, they will be a difficult team for anyone to beat.