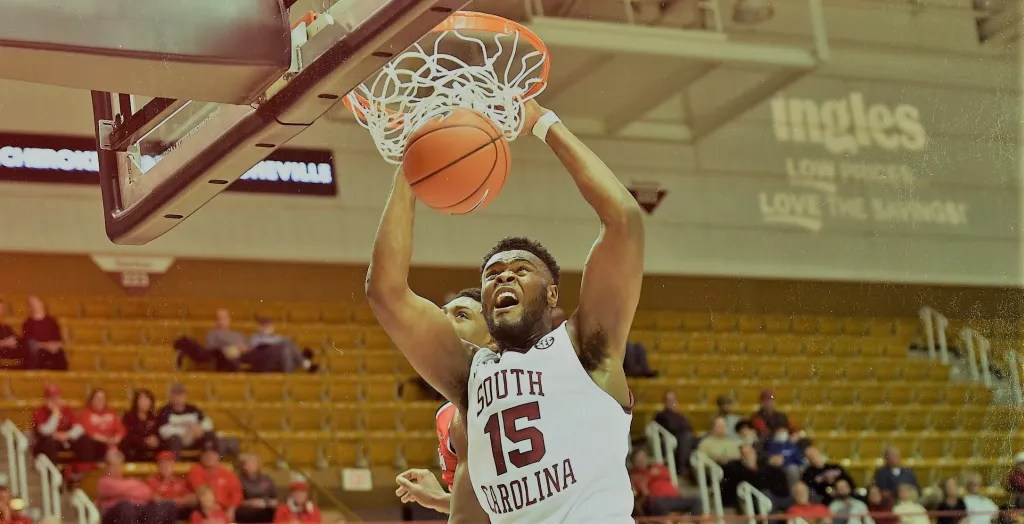 A game that closed as a 1.5 spread in UAB’s favor took the last few seconds to decide and likely made a few bettors sweat. What looked like a comfortable win for the Gamecocks turned into a very tightly contested matchup between UAB and South Carolina basketball in Colonial Life Arena.

Blazers guard Jordan Walker came into the game averaging 21 points and was somewhat stymied by the Gamecock defense. Although putting up 15 points in the losing effort, Walker shot just 4-of-16 from the field as the Carolina upperclassmen helped the ‘Cocks hold on to a victory, moving them to 3-1 on the season.

Junior forward Wildens Leveque stepped up for South Carolina basketball in a big way Thursday night. While always a dominating defender down low, he had yet to emerge as an offensive threat. Through the first few games in the new season, he has looked the part.

While only 3-of-8 from the field, perhaps his most impressive showing this season was defined by his stats on the line. Leveque was able to use his frame to draw fouls, ending up 7-of-8 from the charity stripe to go along with seven rebounds.

While UAB came into the game shooting a respectable 35% from beyond the arc, they could not replicate the offensive showings from their first three games, hitting just 6-of-22 threes in a game where every point was crucial.

Jordan Walker went 3-of-8 on threes but the rest of the team hit just 3-of-14. UAB certainly had opportunities, as South Carolina’s normally stout defense let up several open Blazers throughout the game. UAB will have to knock down their triples if they want to take down Power Six opponents, and they’ll have an opportunity to build more of an offensive identity before they host West Virginia on December 18.

Freshman Devin Carter was Frank Martin’s highest-rated recruit since PJ Dozier and has shown out in his first four career games. Coming into the game against UAB, he averaged 9.7 points and dropped 12 for the Gamecocks Thursday night.

However, his most impactful points came at the end of the game, where he went 4-of-4 from the line in the last minute of play, icing the victory in an uncharacteristically sloppy game for the ‘Cocks. Erik Stevenson’s travel late in the second half was just one of 22 turnovers for South Carolina basketball on the night. Jermaine Cousinard led the team with six giveaways.

A win is a win 100 percent of the time. But this loss will sting quite a bit for the Blazers and won’t be enjoyable to watch in the film room for the Gamecocks. The Gamecocks are in sore need of a point guard identity, and a 22 turnover performance certainly won’t hold up in SEC play. Look for Frank Martin to tinker with the lineup in the upcoming games as the backcourt attempts to find itself a new look. As for UAB basketball, the loss isn’t a game to hang their heads on by any means. Scratching back from a 15 point deficit against an SEC opponent showed the poise and grit of a veteran squad, and, eventually, the threes will fall.

It’s hard to call an upset win a disappointment, but besides an added number in the win column after Thursday night, there wasn’t a whole lot to celebrate for the ‘Cocks. Erik Stevenson looked like he had finally found his shot only to lose it in an uninspiring second half. James Reese has been a bright spot for South Carolina basketball and they need the transfer duo to step up if they want to knock off a very good Wofford squad Tuesday.