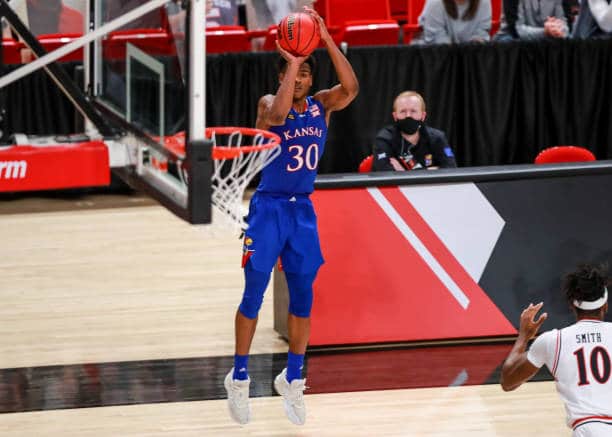 Kansas basketball widened its lead in the second half to win game one of the Champions Classic.

A seven-point lead had Kansas basketball in charge at halftime, but with the Michigan State Spartans in reasonable distance. The Jayhawks’ didn’t let Tom Izzo’s bunch fight back, leading by double digits for most of the second half.

Remy Martin was absent in the first half – a sore sight for Kansas fans. The star transfer from Arizona State was known for his shot-making with the Sun Devils but didn’t even put up a field goal attempt in the first half.

That all changed for Martin in the final 20 minutes. He finished with 15 points – all in the second half, playing with a better tempo and more willingness to shoot.

Don’t be surprised if Martin takes used to adjusting. He often fired up 15, sometimes even 20 or more shot attempts in games with ASU. His leash won’t be quite the same on a Kansas basketball team with far more options. However, KU still needs Martin to be a main factor and in the second half, he responded.

Perhaps the one lone bright spot for a Michigan State Spartans defense that gave up close to 100 points was the inside presence of Marcus Bingham Jr. He guarded David McCormack for much of the first half, shutting down the All-American candidate to just four points on 1-of-4 shooting and two turnovers.

Bingham led the Spartans with two blocks, corraling seven rebounds. Offensively, he shot 50% from the field and tallied 10 points. However, it was Bingham’s grit and determination to shut down one of the nation’s premieres inside talents that kept the Spartans in things for the first half.

Let’s be real, Ochai Agbaji flat out sonned Madison Square Garden. The senior poured in a game-high 29 points on 9-of-17 from the field and sunk all eight of his free throws.

Agbaji had two steals and a few thunderous dunks that produced some of the loudest cheers from this MSG crowd. He showed range on numerous occasions, hitting three triples with more than just a few inches between his feet and the three-point line.

With Jalen Wilson out, Agbaji was a good bet to take control and have a big game. Dropping a near 30-points, Agbaji went above and beyond the assignment to help Kansas basketball to the win.