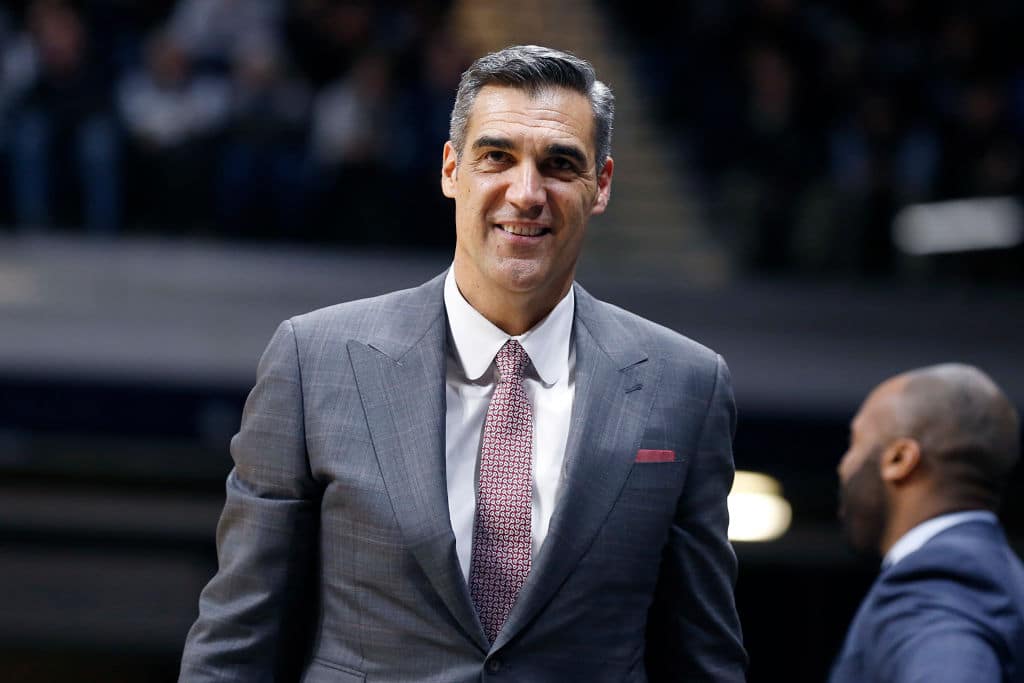 Villanova basketball looks to go for a third title over the past decade.

Villanova basketball is ready to run the Big East again, returning all of its starters except a star and only losing one rotational player. Coach Jay Wright has kept a strong squad as this team finished the 2020-21 season as regular-season champions. The Wildcats lost in the conference tournament to Georgetown but made it to the NCAA Tournament with no issues.

After finishing the year 18th in the AP Poll, this team entered the tournament without Collin Gillespie, who tore his MCL against Creighton on March 3, 2021. Villanova basketball finished the season 18-7 and 11-4 in conference play. The 11-4 in conference play was good enough to finish first in the conference. The Wildcats NCAA tournament run included defeating Winthrop and North Texas before falling to Baylor 62-51.

Villanova basketball lost its massive star in Jeremiah Robinson-Earl. Robinson-Earl was picked at the end of the first round of the NBA Draft to the Oklahoma City Thunder. Cole Swider, a rotation forward who transferred to Syracuse, and the only other player for Villanova not listed on this year’s roster was Kevin Hoehn. He graduated to start his professional career. Coach Jay Wright brought in Nnanna Njoku, a 4-star center, Jordan Longino, a 4-star shooting guard, and a 3-star combo guard in Angelo Brizzi.

Villanova basketball is lucky to have Collin Gillespie back for another year. Still not being lucky enough to enjoy a postseason, the Wildcats are thankful to have a dominant and experienced guard coming back to lead this team. Coach Jay Wright has another coach in this player actively on the floor. Gillespie can do it all and is an excellent point guard. He was eight in assists (92), third in assists per game (4.6), and tied for third in free throw percentage (83.3%). Gillespie has had some unfortunate luck, and if he will return as solid coming off the MCL injury.

Since he was a freshman, Coach Jay Wright has had a lot of faith in Gillespie and played above his year. With Villanova basketball, Collin Gillespie is tenth in points produced per game (14.5) and fifth in assist percentage (26.6). Beyond that, his advanced stats show how valuable he is on the offensive side of the floor, with a top 3 offensive rating in the Big East, Offensive Box Plus/minus, Box Plus/minus, player efficiency, win share per 40 minutes, and offensive win shares. Collin Gillespie was also named player for the Big East and named the first-team All-Big East.

Either Jermaine Samuels is the sweatiest human ever or Hinkle had grease on the floor. I don’t understand this one bit pic.twitter.com/iEIqkbGpBT

Jermaine Samuels has some big shoes to fill after Jeremiah Robinson-Earl has been a massive part of the Villanova basketball team. He is a very talented replacement, can play inside and out, has excellent bounce and footwork. He can easily step up to replace Robinson-Earl.

The giant hole left by Robinson-Earl gives away great opportunity to Samuels. Robinson-Earl was seventh in points (393) in the Big East, seventh in points per game (15.7), second in total rebounds (212), second in total rebounds per game (8.5), fourth in offensive rebounds (62), and third in defensive rebounds (150). The advanced stats are the most opportunity for Samuels with minutes played, points produced per game, and usage percentage.

With all of these stats, Samuels has the right abilities to be a considerable asset for Villanova basketball and be absolute havoc in the big east. He needs to focus on getting to the basketball and rebounding to fill the space left by Robinson-Earl.

Villanova basketball is again set at the starters and has viable options that allow for a strong rotation. The depth isn’t there for this team. There is some experience on the bench, but the points and usage are so minimal.

The stage is set. #LetsMarchNova pic.twitter.com/Swd9DisAEd

These players could easily be solid contributors, but this is not an area that Villanova basketball does not do. Antoine and Dixon are very key players but won’t need to score 10 points every game like how most teams run. The Wildcats develop players to be experienced if they don’t just immediately show talent and value. This team has players that can replace others when in need but rely heavily on the starters.

Villanova basketball has a solid non-conference schedule that will allow this team to coast into the NCAA tournament. This team non-conference schedule includes Mount St. Mary’s, UCLA, Howard, La Salle, Penn, and Saint Joseph’s University. Another asset to their schedule is being a part of the Hall of Fame Tipoff Classic, where the team plays Tennessee and then will play North Carolina or Purdue.

The Wildcats will play in the Jimmy V Classic where they play against Syracuse and Big East-Big 12 Battle where the team faces the team that knocked them out of the NCAA tournament last year and last year’s champion in Baylor University.  The Big East already has a strong conference, and the conference schedule should also allow the team entry into the NCAA Tournament.