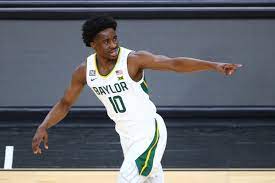 Regardless of the program, climbing to the top of college basketball and claiming a national championship is among the most difficult feats in American sports, professional or college.

Baylor basketball climbed that mountain, behind elite three-point shooting, defense and a system of older players. The national spotlight is not fully on the Bears, with the loss of four starters, three of who are currently on NBA rosters.

However, the talent does not lack in Waco in 2021-22. This year’s Bears team was ranked 3rd in the Big 12 Pre-season poll released on Thursday, so the Big 12 coaches see the talent still within the program.

Even with earning zero first-place votes, Baylor basketball is capable of repeating as Big 12 champions.

The maturity of the backcourt.

It was clear after the trio of Butler, Mitchell and Teague ventured toward the NBA, there was going to be a transfer addition to complete the roster. Coach Scott Drew was able to go out and pick up former Arizona guard James Akinjo.

Akinjo averaged 15.6 points, 5.4 assists and 1.4 steals per game with the Wildcats. He shot 40% from beyond the arc, but only 36% from inside the line. Akinjo’s inefficient two-point shooting does cause a bit of concern, but he will be on the most talented roster of his four-year career in Waco.

Adam Flagler returns to the Baylor basketball backcourt, after being a boost off the bench last year. Flagler averaged 9.1 points and shot a blazing 43.4% from beyond the arc. Flagler is capable of carrying a starting role, after averaging 15.9 points on 38% from beyond the arc his freshman season at Presbyterian.

No Butler, Mitchell or Teague this year for Baylor, but Adam Flagler is one of the many NBA prospects on the Bears roster. Three level scorer that will enter the starting lineup and look to replicate the elite guard play that they have had over the past few years pic.twitter.com/kyQ28BPl3P

The missing piece will be where the other two guards stand and how much playing time will be between the two. LJ Cryer played minimal minutes but reached over 3,000 points in his high school career. Four-star Langston Love is joining the program after having a successful tenure at Montverde Academy. Love is the 40th ranked player, according to 247Sports and is expected to earn playing time.

How quickly this group gels and showcases the talent each one of them has will be critical and can determine whether the excellent scoring the Bears showed last year wasn’t an anomaly.

The crown jewel commitment out of the recruiting cycle was Sunrise Christian (KS) forward Kendall Brown. Brown is the fifth-highest commitment in the program’s history and brings in yet another McDonald’s All-American for coach Drew. Brown is athletic and is able to score at the rim at a high rate at 6-foot-8.

Brown passes well and is expected to be a one-and-done talent. He was announced as the preseason Big 12 Freshman of the Year and is hoping to carry that honor throughout the season. The question remains depending on roles if Brown starts for the Bears.

With rotations and the success of Jonathan Tchamwa-Tchatchoua, Flo Thamba and Matthew Mayer and their roles in the national title team, it is unclear where Brown fits, until the Bears put out their team for the first time.

The clear athleticism and talent are there. How he will be used under Drew and his role will play a factor in the Bears’ chances of winning their second straight Big 12 title.

Baylor Basketball must be elite in an important category

Baylor basketball doesn’t have the luxury of having among the best backcourts in the country this year and aren’t expected to shoot at a 41% clip from beyond the arc like they did last year.

The Bears must find that same trait that they had last year, just in a different category. Although this team is not nearly as experienced, I’d argue they have a more athletic roster, with some higher upside players this year.

Brown and Mayer make up the athleticism, alongside Tchamwa-Tchatchoua’s pick-and-roll capability and Thamba’s defensive presence.

Flagler and Akinjo are capable of scoring at all three levels and we’ll need to see more from Cryer and Love for further evaluations.

What that elite area is still in question, but if Baylor wants to repeat, they must find that area.

Featured image from Our Daily Bears