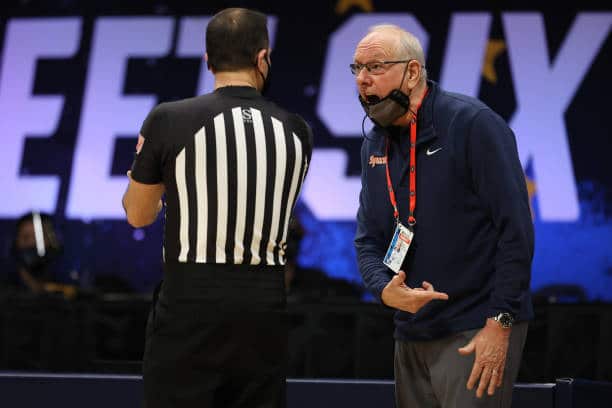 Syracuse basketball was able to replenish its losses with a star freshman in Benny Williams and a potential First-Team All-American in Buddy Boeheim.

Jimmy Boeheim joins Buddy as both of Jim Boeheim’s kids will now star for Syracuse basketball. Plenty of guys return as the Orange find themselves in a comfortable spot within an ACC conference where most teams underwent a lot of changes.

The biggest things to know about this Syracuse basketball team are three-point shooting and presence in the paint. The Orange have some of the best perimeter threats in the ACC and a handful of big men to rally the troops on the boards.

Take the notation out of your head that Buddy is just the coach’s son. He’s been more than that for a few years now and this year might just pass his old man Jim as the most famous Boeheim in the house.

Buddy rose onto the national scene during the ACC and NCAA Tournaments, exploding for 25 or more points in four of his five postseason contests. Now, as a returning senior on a team that loses some potent scoring in Alan Griffin and Quincy Guerrier, Buddy may just be ready to have a career year.

Jon Rothstein recently noted that Boeheim has also worked on his dribbling, which could completely open up his game for the next level and more shots for the players around him. He’s an ACC Player of the Year favorite from day one.

Sidibe has had a history of knee troubles and last year missed practically the whole season after going down in game one of the season. He tried coming back in February against Clemson but re-aggravated it and didn’t play again for the remainder of 2021.

Sidibe claims to be feeling much better, but we won’t be able to judge that until it’s proven on the court. When at his best, he’s the top inside scoring presence on this Syracuse basketball team. Sidibe’s rebounding and shot-blocking are two major components as well.

If Sidibe’s season follows that of most of his career, the Orange will be fine with Jesse Edwards, Frank Anselem and John Bol Ajak. However, Sidibe would really give SU a big-time player down low, especially with all of his experience.

If there’s one coach that doesn’t need a deep bench to be successful, it’s Jim Boeheim. Sure, he’ll go deep if he has the talent, but if not, he’s fine going with seven or eight guys and playing them MINUTES.

This season, it looks like a bit in between. If my projected starting lineup holds true, Edwards, Jimmy Boeheim and Torrence will all play important bench minutes throughout the season. Frank Anselem could extend it to a nine-man rotation, but he also could be the odd man out if the Hall of Fame head coach doesn’t think he’s ready yet.

The depth at center is truly unbelievable with Ajak also a candidate for some minutes. Guard play could be better, but Girard III and Boeheim should both be expected to play at least 35 minutes apiece, with Torrence serving as the key guard off the bench. Losing Kadary Richmond and Alan Griffin could be costly but coach Boeheim will find a way to make it work.

Usually, defense comes to mind first when talking about a Syracuse basketball team but last year it was the Orange’s offense. Syracuse was 24th in the country in adjusted offense and plenty of signs point to a similar ranking this season.

Having two upperclassmen guards returning will help keep the flow of the offense. Benny Williams and Cole Swider also provide more of a perimeter offense than Alan Griffin and Quincy Guerrier did and the ball movement should be even better.

The spacing for Syracuse basketball should be the best its been in quite some time and with three dynamic three-point shooters, the Orange could put up a lot of points in games where everyone is clicking.

I’m looking at Syracuse basketball to be a sleeper in the ACC. Alan Griffin, Kadary Richmond and Quincy Guerrier might seem like big losses, but Jim Boeheim went out and got some guys that might totally change the way this Orange team plays on offense. The rhythm could be the best it’s been since the early 2010s.

The entire nation will be able to see how good this SU team really is as they play in the top non-conference tournament in November. Syracuse draws VCU in round one and will see two additional games against the following: Arizona State, Auburn, Baylor, Loyola (Chicago), Michigan State and UConn.

The Orange will also benefit the most of any team by having fans back in the ‘Loud House’. The home game against Duke should shatter the NCAA on-campus attendance record yet again – and I have an idea for that I’ll get to some other time.

Overall, this seems like a Syracuse Orange team that can make a run in March and might be able to have one of its best ACC finishes since joining the conference nearly a decade ago.