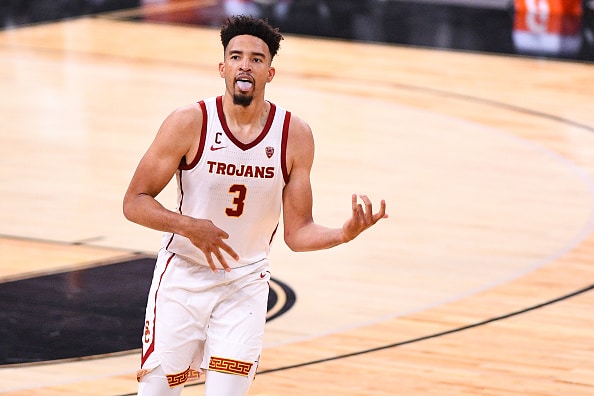 USC Basketball looks to keep the momentum going off their first Elite Eight appearance in 20 seasons.

Evan Mobley may be gone after being a lottery pick over the summer, but a majority of the core group that led USC basketball to a stellar season are returning for 2021-22. Furthermore, Boogie Ellis joins the program from Memphis looking to showcase the talent that made him a highly-touted recruit out of high school.

The Trojans are poised to try and repeat last season’s success, but it won’t be easy. The Pac 12 appears to be back after sending the most teams to the second weekend of the NCAA Tournament in March. There is hope that the continuity of this group will be what carries them to similar success.

There may no longer be a Mobley duo in Los Angeles, but Isaiah Mobley looks to be the guy for USC basketball this season. He returned after testing the NBA waters and is the team’s top returning scorer. He was also second on the team in rebounding, with only his brother grabbing more boards.

Mobley has improved those scoring and rebounding numbers in each of his first two seasons, and that should continue heading into his junior season. It will be interesting to see how he handles being the best big man on the team, as a lot of attention was focused on brother Evan last season in the paint. Still, he has more than enough talent to hold his own and be a playmaker for the Trojans this season.

Boogie Ellis returns back to Southern California after spending two seasons at Memphis. Ellis was expected to be part of a recruiting class that would bring Memphis basketball back to the national spotlight. However, it never quite worked out there. Ellis came off the bench for half of last season after being a starter as a freshman. His performance earned him AAC Sixth-Man of the Year honors.

Ellis isn’t coming to USC to be a bench guy though. If he earns the starting role, he has big shoes to fill with Tahj Eddy gone. Ellis’ ability to fit in with USC basketball will go a long way towards improving the Trojans’ ability to be a complete team. If he can play the way many expected him to out of high school, he can be a game-changer for a team whose biggest question mark is at the point guard position entering 2021-22.

USC’s bench is a mixed bag after Ethan Anderson and Max Agbonkpolo. Anderson largely gave Tahj Eddy a breather last season and could end up being the starter at the point position if Boogie Ellis needs more time to mesh into the rotation. Agbonkpolo served the same kind of reserve role as Anderson, providing rest for the Mobley brothers. Both will be expected to take larger roles, with Agbonkpolo also in the mix to start alongside Isaiah Mobley.

Beyond those two guys sits younger players who will be expected to take a step forward. Boubacar Coulibaly and Reese Dixon-Waters are guys who have high upside. Coulibaly can be a defensive stalwart down low, while Dixon-Waters looks to be someone who could really break out in a big way. Top 100 recruit Malik Thomas could fit into the point guard rotation as well to get some valuable experience. Joshua Morgan will get some minutes as well down in the paint.

USC basketball obviously played through their bigs last season with Evan Mobley present. The Trojans saw just 31 percent of their total field goals attempted last season come from beyond the arc. There’s no need to shoot from deep when you have talent in the paint. However, when playing a team that can match that talent, like Gonzaga in last season’s Elite Eight, it can come back to haunt you.

USC sees its best three-point shooter from a year ago in Eddy gone. Drew Peterson and Isaiah White each shot above 35 percent last season, but neither attempted more than three deep shots per game. Boogie Ellis looks like this year’s best bet to be the sharpshooter. Teams never want to live and die by the three, but the Trojans will once again be searching for someone to be the go-to shooter from beyond the arc.

USC basketball isn’t planning on going away after last season’s run. The Trojans have plenty of pieces left from that Elite Eight squad and add a hidden gem in Boogie Ellis. The Pac 12 will be a grind with so many other teams looking to keep the same kind of momentum from a season ago.

The biggest question mark will be how USC responds on nights when the offense is out of rhythm. Their defense was enough to keep them in most games, but they went just 5-6 in games where they scored less than 70 points. Given the losses of Evan Mobley and Eddy, the team’s two top scorers, other guys will have to step up in those roles. If they struggle to do that, regression is a possibility.

Still, there’s enough talent here for someone to fill those shoes. USC should compete for a conference title once more, and is certainly capable of pushing for a second-weekend finish and beyond in 2021-22.