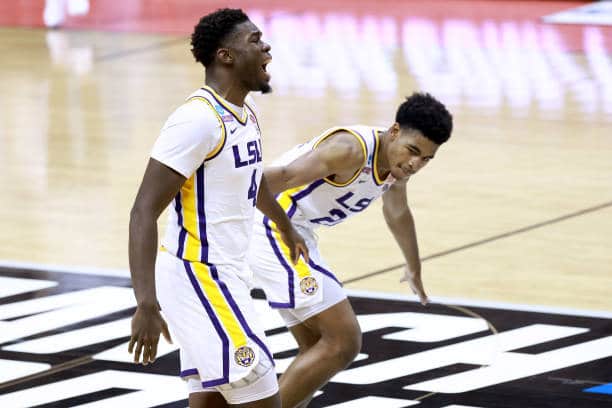 Will Wade has weathered the storm in Baton Rouge, now can he deliver LSU basketball another NCAA Tournament berth?

LSU basketball has serious star power with Darius Days returning and helped by Xavier Pinson and Adam Miller. The Tigers also added on a top ten recruiting class in hopes for everyone to click for a deep tournament run.

Someone this talented yet this injury/health prone needs to have a category like this. If he is able to play, it will be a huge boost for LSU basketball. However, the Tigers can’t count on him, as unfortunate as that is.

Days tested the pro waters before returning to lead this LSU basketball squad as a senior. He started 28 of the Tigers’ 29 games last year. He averaged over 11 points on a game on a high-powered offensive team with a plethora of scoring options. Days added a team-high 7.8 rebounds per game and he shot almost 52% from the field and 40% from three-point range.

With Cameron Thomas, Javonte Smart, and Trendon Watford all gone from last year’s team, Days will be relied upon heavily for his leadership as well as his scoring. To show how valuable Days was, the Tigers were 19-1 when he scored in double figures. He has played in 94 career games, with 61 of those as a starter so there’s no doubt who the leader, as well as heart and soul of this year’s LSU team, will be. For that reason alone, Days must be LSU’s MVP if they are to have any chance at replicating last year’s success.

Miller had an excellent freshman season at Illinois last season and was expected to be a star for the Illini moving forward. He decided to take his talents and was one of the most sought-after players in the transfer portal. His decision to move on to Baton Rouge surprised many and his play this year will play a key role in the Tigers’ success. LSU basketball lost almost 70% of its scoring from last year. Miller has the ability to score at all three levels and will need to improve upon his 8.3 points per game last year if LSU is going to compete in the uber-deep SEC.

There’s talent on the bench, albeit untested talent. Other than Tari Eason, who averaged 7.3 points and 5.9 rebounds in a key role with Cincinnati last year, there isn’t much collegiate experience on the bench. However, the Tigers did bring in the 8th-ranked recruiting class so players like Justice Williams (No. 3 shooting guard), Jerrell Colbert (No. 12 center), Alex Fudge (No. 12 small forward), and Brandon Murray (No. 24 guard) will all have an opportunity to earn playing time and increase the depth of Coach Wade’s squad.

Cam Thomas helped LSU basketball to fifth in the country in adjusted offense last season. That’s obviously an important analytic to track again. Days, Miller and Pinson are all very keen offensive players. It might drop a little, but expect the Tigers’ offense to score with the best of them.

There’s no denying that LSU basketball was playing as well as anyone at the end of the 2021 season. The Tigers reached the SEC championship game and were one of the teams that could argue they were seeded incorrectly entering the NCAA Tournament. LSU was seeded 8th and beat St. Bonaventure but fell to Michigan in the round of 32.

Cam Thomas, Javonte Smart, and Trendon Watford have all moved on to play professionally, but Will Wade was not only successful in the transfer portal, but also in bringing in a freshman class that can compete in the SEC.

As successful as they were offensively, Wade will need this team to buy in on the defensive end of the floor if they want to make a run at last season’s success. The Tigers will also need freshman center Efton Reid to step in and be a presence on the frontline. The 6-11 big man excelled at IMG Academy last year and was the number 3 center in the Class of 2021.

This team may be slightly more balanced on both sides of the floor and will need to find its identity in the preseason before it heads into the gauntlet of SEC play.