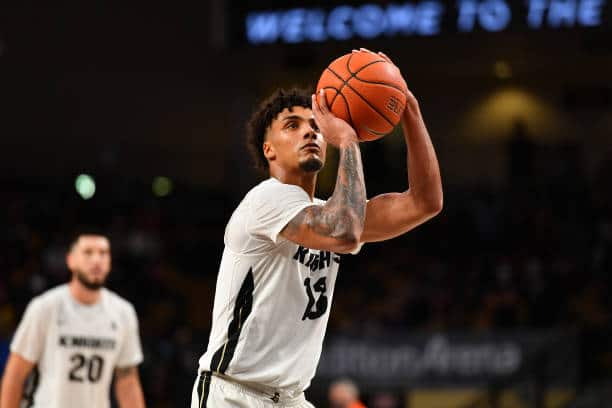 Last year, after winning huge recruiting battles, UCF basketball hoped that the lackluster 2020 would allow this team to explode into 2021.

This Knight’s team lost Ibrahim Famouke Doumbia to Cal State Fullerton, Moses Bol to Milwaukee, Isaac Ward to Spring Hill, Avery Diggs to Chattanooga, and Collin Smith who is in the portal with no landing spot.

UCF had a very disappointing 11-12 season, going 8-10 in conference play. The lack of preparation and ability to mesh was a huge liability at times. However, after a year and bringing back the starters and the talent, UCF basketball will be difficult to beat with cohesion, coaching, and length. Last year, they had some great matchups set up and even won a couple, including OU (canceled), Auburn (win), Michigan (loss), and Florida State (win).

All the highlights from the dub in NC 👇 pic.twitter.com/yejby3Ldqb

Perry is going to be the spark and leader. UCF basketball will run its offense through him, and he hopes to set fire to the conference with his team and shooting for that top spot and a chance at the NCAA tournament bid.

With coming in just a year ago, Walker had a nice step up in the NCAA. UCF is hoping that the 3.0 point increase on average over his freshman year will continue.

Walker’s growth will be huge for this team as his agility and size will benefit this team. While Coach Dawkins is used to having a dominant big man, Walker really expands the Knight’s ability.

His talent is right on the brink, and while he hopes to end up in Mahan’s spot as the go-to guy, another year of growth will allow him to really make the leap the following year. If he takes a step back, Walker may end up coming off the bench and potentially being the sixth man of the year. His talent is a lot to live up to, but UCF basketball will need him to.

UCF basketball returns all of its starters. Dawkins looked to add depth and has done so. All of his bench players had minutes last year in college basketball games. The Knights have nine guards and six forwards. Coach Dawkins will look to a couple of forwards to play the five. However, the speed and length of UCF basketball will cause some havoc as it will cover a lot of distance, disrupt passing lanes and be more versatile on both ends of the court.

This analytic is pretty impressive for UCF as the Knights are in the top 32 teams in second-chance conversion percentage. This percentage is the total number of missed field goals divided by the field goal conversions that occur five seconds or less after an offensive rebound. They have a 6.42 percent, which is behind only two other AAC teams in Memphis’s 7.16. This is a big stat for the AAC. With the length and talent of the Knights, the opponent needs to hustle back into position or very quickly get in the way of players on breakaways.

With UCF basketball looking to advance into the Big 12 in two years, they need to improve in bounds. While the program is ready to play in the power-six, being more consistent will need to be considered.

This team gets to face off against Oklahoma after the cancellation from last year. Michigan, Florida State, and Auburn are all returning to this year for a fantastic non-conference schedule.

The Knights will also take on Miami, Robert Morris, Coral Gables, Jacksonville, Bethune-Cookman, North Carolina A&T, and North Alabama. UCF basketball hopes to slide into the top half of the conference and should do so as it hopes to propel itself into a new chapter in the Big 12 in upcoming years.

Projected Finish: 3rd in the AAC