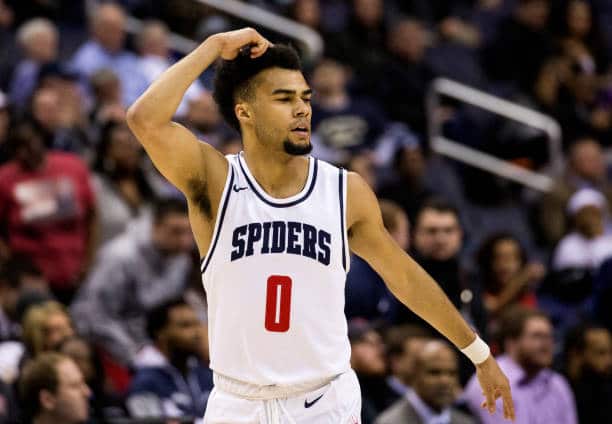 Richmond basketball returns a star in Jacob Gilyard, hoping that will be enough to make a run at the Atlantic 10 title.

Richmond basketball had high hopes in 2020-21, but fell short of those expectations with an eighth place finish in the Atlantic 10 and a 14-9 (6-5) record. Richmond won one NIT game, before finishing its season in Denton, TX, losing by one point to Mississippi State.

With a lot of quality production from last year returning, here’s a look at the projected starting lineup and rotation.

The super senior decided to use his COVID year and spend his fifth season with the Spiders. Gilyard is a three-time All-Atlantic-10 member, alongside three All-Defense Team recognitions and was the conference’s Defensive Player of the Year in 2020.

Gilyard gets it done on both ends of the floor, with a career 36.3% three-point rate and averages five assists for his career. Gilyard got his most recognition this past season after a 22 point, 4 assists and 5 steal performance against Rhode Island in the win.

Gilyard is one of the best two-way players in mid-major college basketball and will be the captain of this team, just as he has for the past few seasons.

Being the replacement for a player like Blake Francis is never an easy task. Gustavson will have to fill those shoes after his previous three seasons coming off the bench.

What will dictate the rotation and gel of the team is Gustavson finding a three-point shot. He doesn’t shoot many and on a team that finished 83rd in the country in three-point percentage, Gustavson will need to improve those numbers.

Gustavson will get a reality check of big minutes and how he can live up to those minutes can be a make or break for the Spiders in 2021-22.

With the bench receiving little attention last year, to say its peak will be middling this season is not a brash statement. The Spiders return the majority of their bench from last year and are hoping for more minutes.

Although dealing with injuries, Connor Crabtree was the most productive scorer off the bench and is expected to have a better season. He’s a player to keep an eye on.

Although not the most stiffening defensive team against stopping scoring, the Spiders have a knack for creating turnovers, as they ranked 12th nationally in steals last season.

Headlining that stat was Gilyard, who has led the NCAA in steals over the past two years. It would not shock many if he finished atop for a third straight year. He’s a way for the Spiders to create momentum and help the offense in transition.

How teams will game plan against Gilyard will be interesting, but the Spiders will have to rely on steals and creating their own momentum in order to stay in any game they are in.

With a team returning a mass amount of production, alongside a superstar player in Gilyard, the continuous expectations for Richmond basketball have been the highest in quite some time. Some of the most notable non-conference games for the Spiders includes:

Richmond basketball has a good blend of solid power five schools, alongside some of the best mid-majors of the past three seasons.

With the amount of production Richmond returns, alongside some games that will test them early, the Spiders should be well prepared to challenge for the A-10 title and at their peak, be considered for an at-large bid.

Projected Conference Finish: 2nd in A-10

Postseason Ceiling: Round of 32 Exit