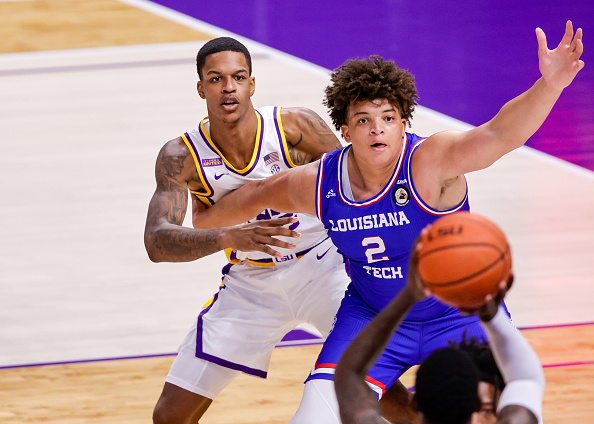 CBB Rank 2021 moves into its next ten teams, starting with Louisiana Tech basketball coming in at number 89.

Louisiana Tech basketball had a strong finish to the end of last season, finishing in third place in the NIT. The Bulldogs seemed to do all of this under the radar, going 24-8 (12-4 CUSA) without much buzz. That makes three straight 20 win seasons, and they’ve done that five times in coach Eric Konkol’s six seasons. Led by last year’s freshman of the year Kenneth Lofton, Tech has its eyes set on winning Conference USA this season.

Louisiana Tech basketball had a balanced scoring attack last season, but Lofton led the team in both scoring and rebounding last season. Furthermore, he shot an efficient 56.7 percent from the floor. All of that led him to the CUSA Freshman of the Year award and the conference’s third-team. He stepped up for the Bulldogs in their NIT run, scoring 20 or more points in their final three games, including the game-winner against Colorado State to clinch third place. Expect Louisiana Tech to run things through Lofton this season, and expect things to open up for the players around him when opponents look to clamp down on him.

The backcourt for Louisiana Tech basketball is a bit thin, with Christon providing the only depth with experience. He didn’t put up eye-popping numbers off the bench, but he did provide some much-needed minutes to give other guards on the team a rest. Now, he may be asked to do more for the Bulldogs this season with only a pair of freshmen sitting behind him to help out. An injury set him back in the prior two seasons, but he was looking like a breakout player for Tech before that. If he’s able to find that again, he can be a sparkplug off the bench.

Aside from the aforementioned Christon, this team has almost no experience on the bench. Big man Kenny Hunter played minimally last season, and Kaleb Stewart and Terran Williams are three-star recruits who may be asked to step in right away. There are some talented transfers coming in, including Keaston Willis and LaDamien Bradford, but both are expected to redshirt under the transfer rules. The lack of depth could be what does Louisiana Tech basketball in this season.

This team has start power in Kenneth Lofton Jr., and his talent will be good enough to have Louisiana Tech basketball competing in Conference USA once again. The biggest key here is how other players step up in the absence of Kalob Ledoux and JaColby Pemberton this season.

If the Bulldogs can have a balanced offense again, it will be tough to key in on any one player. Furthermore, as Lofton develops his game, he can hopefully learn to recognize when he is double-teamed to find the open teammate. Opening up the floor like that will make Tech tougher to defend on the offensive end.

One thing to watch for besides the inexperienced bench is the lack of height on this team. The Bulldogs don’t have anyone on the team above 6-9, which could be a problem if things aren’t clicking down low on a given night. Regardless, this program has found a way to win consistently under Konkol, and that doesn’t look to slow down in 2021-22.