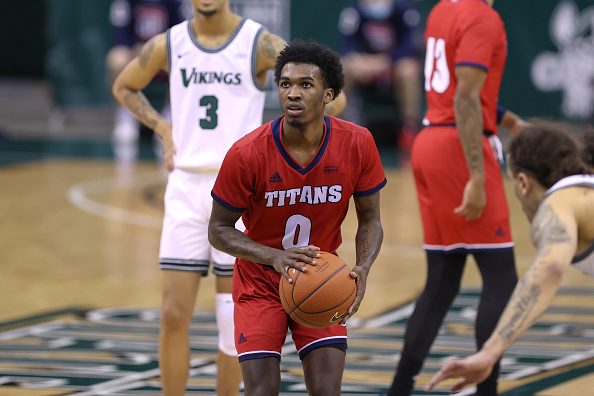 CBB Rank 2021 goes through the projected top 100 teams in college basketball. Detroit Mercy basketball comes in next at 96.

Detroit Mercy basketball finds themselves a couple spots shy of number 100 in the CBB Rank. The Tians went 12-10 (10-6 Horizon League) last season. After starting out just 1-7 before the calendar flipped to 2021, Detroit Mercy rebounded to lose just three games the rest of the season, finishing third in the Horizon League standings. The Titans continue to be led by scoring machine Antoine Davis, and are looking to get back to the NCAA Tournament for the first time in 10 seasons.

This was an easy choice for Detroit Mercy basketball. Davis has absolutely been a stud ever since stepping on the floor for the Titans back in 2018. He averaged 24 points per game last season, and, believe it or not, that’s the lowest of his three career scoring averages. However, Davis can dish out the ball too, setting a career high with nearly five assists per game last season. He has developed into a do-it-all kind of player at Detroit Mercy, and he’s the type of player that can singlehandedly win a game for the program when needed.

Waterman came on strong for Detroit Mercy after becoming eligible halfway through last season. He has the ability to play anywhere on the court, even though he sits just a shade under seven feet tall. That kind of versatility will be big for the Titans as they try to fit a lot of other new pieces around the returning core of Waterman, Davis, and Bol Kuol. If he can avoid a sophomore slump in his second year with the program, that could open up many doors for Detroit Mercy to take the next step towards the top of the Horizon League.

Detroit Mercy basketball had the Sixth Man of the Year last season in Matt Johnson. He was just the second Titan to win that award all time. After Johnson, though, the bench teems with mostly new guys who will have to find their role with the team. Kevin McAdoo logged some solid time at Bradley, while Max Curran redshirted at the Division II level last season. It should be noted, however, that Curran was at UMBC prior, playing on the team that shocked Virginia in 2018. Willy Isiani, a native of the country Georgia, rounds out the bench, playing in all 22 games last season while averaging just under 15 minutes per game.

Detroit Mercy basketball finally felt like they were hitting their stride towards the end of last season. Head Coach Mike Davis is trying to get the program back to being consistently relevant in the Horizon League, riding the talents of his son along the way. Antoine Davis will keep this group competitive in the league, and he should get help once again from Bul Kuol and Noah Waterman. Meanwhile, Matt Johnson should provide a spark off the bench once more.

Meanwhile, the Titans will rely on a bevy of new faces to try and provide meaningful depth and production. DJ Harvey and Prince Oduro are two guys who seem like the best candidates to slide into the open starting spots in the rotation. Both players are trying to see if they can finally find their groove after both have bounced around multiple schools over the past few years. If Mike Davis can gel the new pieces together with the guys who have been around the block at Detroit, perhaps the Titans can finally take the next step and win a league title.

Ceiling: Round of 64 exit