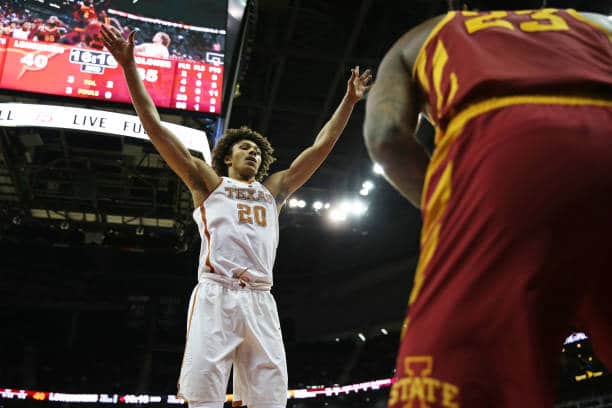 The 2021 NBA Draft is only a week away. These are the seniors to look out for.

Which senior will have the best NBA career?

The 2021 NBA Draft is full of valuable senior talent. Even though the majority of prospects are being drafted based on potential, some four-year players still fit the mold of being on an NBA roster.

Hailing from Shawnee State in Portsmouth, Ohio, EJ Onu is the lone non-Division One college basketball player that has a serious chance of being drafted. The 6-foot-11 Onu has game on both sides. Onu averaged 16.9 points, 8.1 rebounds and 4.5 blocks last season. He’s had some serious draft consideration and should be picked up post-draft at worst.

Wright boosted his 2021 NBA Draft potential in the NCAA Tournament when he dismantled a hot Georgetown team. He showed efficiency going 4-of-8 from the field for 12 points. McKinley’s leadership shined, dishing out a game-high 13 assists with 0 turnovers to show for.

This draft has so many great point guards, so Wright’s senior status would make him a late second-round pick at best. However, he’s still a very gifted passer and does have the ability to score at times. Expected a veteran team to go after the former Colorado stud.

Not many players accomplished as much in college basketball history as Luka Garza did. The Iowa big man left Iowa City as the 2021 AP Player of the Year, 2021 Wooden Award winner, a two-time Consensus All-American and the 2021 Naismith Award winner.

Unfortunately, the college game doesn’t always translate to the NBA. Garza is slow, unathletic and doesn’t necessarily thrive from deep. He can hit the college three – 44% last season – but doesn’t show as much promise from the further NBA line. However, Garza is a hard worker and a bruiser down low. He certainly has enough talent to get a look from a team looking for an experienced center.

According to tankathon.com, Petty will get NBA looks because of his defense. At Alabama, Petty averaged 1.3 steals per game his senior season. At 6-foot-5 and a quick yet physical guard, that should translate easily to the NBA.

On the offensive end, it’s a struggle for Petty. His junior season was his most efficient at 46.2% from the field, but that dipped to 42.0% in 2021. His three-point shot is streaky, which won’t work well for a guy whose role would be limited. I personally like Petty’s size, so if he can continue to work on his shooting, he would be a nice pickup for a team looking for an on-ball defender in the second round.

If you’re going by tiers, Mamukelashivi starts the separation between good seniors who deserve a chance and seniors who could play in their rookie seasons in. Multiple 2021 NBA Draft outlets have said different versions of ‘Mamu’ being the most unique player in this class.

At 6-foot-11 and 240 pounds, Mamu already has good size for the NBA. He’s practically a point forward, averaging 17.5 points, 7.6 rebounds and 3.2 assists per game last year. The Georgian (country) born player has an elite three-point shot for his size and is great under pressure. Mamu will likely only be able to play power forward until he gets better inside against taller players, but outside to in, he’s an extremely gifted player for his size.

Sam Hauser is possibly the best catch-and-shoot player in the 2021 NBA Draft. He shot the three-ball at a 41.7% clip last season but showed what damage he can really do early on in his career. In 2018 at Marquette Hauser shot an unbelievable 48.7% from downtown.

That will really be Hauser’s only calling in the NBA, although he can back down guards in the mid-range. Defensive is a big liability, but Hauser will likely be a guy off the bench to come in and make shots. He’s done that his entire career and I don’t see it stopping now.

If there’s another tier, the cut-off again begins with Livers. I see him having the potential to grow into a starting role and at the very least be a valued role player for many years.

Livers is an extraordinary three-point shooter and a much better athlete than Hauser. His on-ball defense needs work, but the potential is still there for Livers to turn that part of his game around. However, the most intriguing part about Livers is his ability to play positions 2-4 in the NBA. At 6-foot-7 and 230 pounds, he can stay with most shooting guards and body up against forwards. There’s a lot to like about the forward from Michigan.

Whereas Livers is a better athlete than Hauser, Jones is just a superb athlete overall. Jones’ game isn’t as much about the numbers, although he did average 11.2 points, 6.6 rebounds, 3.3 assists, 1.7 steals and 1.1 blocks last season.

Jones has late first-round potential and will easily be a second-round pick. Alabama had so many scoring options last season, it’s really tough to tell what Jones might’ve done with a different team. 44.6% from the field and 35.1% from three is promising for a guy who already does most everything else above average.

Duarte was set to be number two on this list until news came out about him having a “terrible workout and not in shape” among other things (video below). However, he’s a good spot-up shooter, can find his own shot and has toughness.

There’s no denying that Duarte can score the ball. Last season at Oregon his offensive numbers were 17.1 points, 53.2% from the field and 42.4% from three. With that being said, if it’s true Duarte’s workout was that bad, that can’t be a good thing. However, I’m still willing to bet on his 50-plus games at Oregon over one workout in an empty gym.

Sims slides in after the Duarte news, but even that is risky. After a promising freshman campaign, Sims never totally put it all together, other than being a decently reliable center, especially inside on offense. He shot the ball at 69.6% last season. That type of ease under the basket can’t be taught, so for teams looking for a big man who doesn’t need to be told how to finish, Sims is the man.

Sims is your traditional big man. He never shot a three in his entire career at Texas, so what you’re getting is a polished center around the rim with shot-blocking ability. However, even that part of his game isn’t flashy. Wherever Sims goes in the 2021 NBA Draft, expect there to be some groans. Even though he’s a senior, he’s still a project, but it might be worth it.

No other senior even comes close to Corey Kispert from Gonzaga. He’s the best shooter in the 2021 NBA Draft and has so much more to offer than that. Think Sam Hauser and Isaiah Livers combined with even better stats. Kispert will be a future starting in the league and at worst will be a 10-12 year NBA veteran. Kispert and Jalen Suggs (pictured below) could both be lottery picks. Our NBA Draft expert Ariel Puterman has both inside the top 15 in his big board.

His senior year statline was incredible: 18.6 points, 5.0 rebounds, 1.8 assists, 52.9 FG%, 44.0 3P%. That type of range and overall scoring ability will translate to the NBA in no time. Kispert has the type of game that can fit with any team. He might be a senior, but given his talent, teams will be willing to look past that.